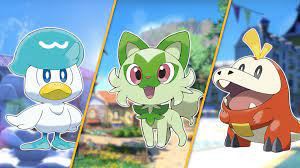 As we’ve said yesterday, Pokemon Scarlet and its twin brother Pokemon Violet have now got a new trailer, and on top of that, we now also have the release date for both games. They will launch on the Nintendo Switch on November 18th, 2022.

The new games will support a four-player co-op, and they will be based in a new region that we are yet to learn more about.

We also know some of the new monsters (Pawmy, Smoliv, and the most important one, Lechonk). It shouldn’t be surprising if these two games will achieve game-of-the-year status soon after being released.

“Pokémon Scarlet and Pokémon Violet allow multiplayer gameplay with up to four players. Along with series staples, such as trading and battling Pokémon, you will be able to explore the various locations of the region in these games with other players. You can discover new Pokémon and explore unfamiliar areas with your friends and family, opening the door to an adventure more precious and fun than ever!”

Make sure your wallets are ready on November 18th, and yes – do catch them all. You can watch the trailer below: