Wow, this one is different.

I tend to fall into explaining a game, moreso than reviewing or critiquing it, a lot of the time. But this is one of those cases where that's actually...Probably going to be necessary, just to lay out what we're even looking at.

So, Windjammers. A classic arcade game for the NeoGeo, re-released with slick updates, a solid emulation wrapper, and online play. I'll tell you now: Like all the other DotEmu releases, this is a really, really well done release. I can't see a single technical issue that was introduced by their work, they cover a ton of display options, it's just top notch.

That said, what exactly is Windjammers? What's it about, and what do you do? That's...Gonna take some explaining. Do you know what a frisbee is? Probably. Big plastic disc you throw to your friends and/or dog. Do you know what Ultimate Frisbee, or now just called Ultimate, is? The sport that's kind of like volleyball or tennis, but with said plastic dic? 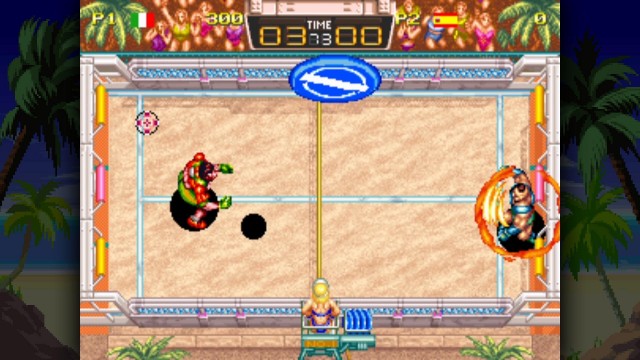 But on the very specific craziness of early-mid 90s arcade gaming.

Core rules are simple: You've got a wall past your opponent with a bunch of yellow and some red(either yellow in the center and red at the corners, or vice versa). Disc hits the yellow, you get three points. Disc hits the red, you get five. By default, sets are first to 12 points. You've got the same behind you. Catch the disc, throw the disc, try to score points.

At the core it sounds a lot like Pong, right? And it's not unlike it. But here are the wrinkles. For one, you can move freely until you get the disc, then you have to pick where to throw. For two, you can throw at any angle, or lob it, or put curves. And for three, you have super moves.

This starts the mindgames. Because Windjammers belongs to a very specific, but also very wide-reaching, meta-genre I call fighter-like: It's any game that's focused on 1v1, head to head gameplay, with an unchanging set of capabilities, built around mastery of the core system. You'll find these in a lot of genres. Puzzle games, shoot-em-ups, action-adventure games, it's even related to the loop behind a round in a TCG once your decks are locked in.

And it is, bar none, my absolute favorite fucking meta-genre ever.

So, okay, let me get back to the explanation of the core systems. The controls in this are super, super simple, being two buttons and a control stick or dpad. Button 1 throws, button 2 lobs, and...That's it. That's all you need. In many ways, you can get a lot of that feel of a good fighting game out of Windjammers, and get it very quickly, because of how simple the mechanics are to teach in just a few rounds. 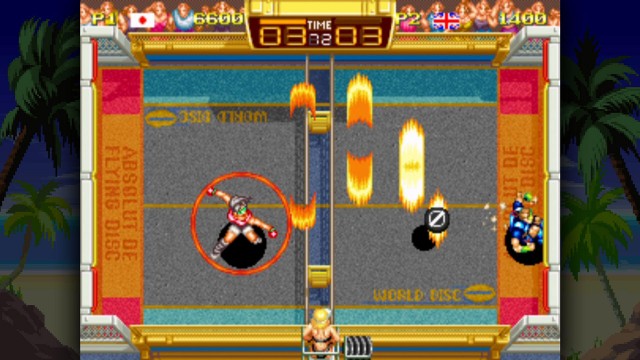 Once you've got the disc in your hands, you've got three major options. You can hit button 1, plus a direction, to just throw it straight and let it rebound off of any walls. You can throw in a half-circle motion when you do to put a curve on it. And you can hit button 2 to give it a lob. The quicker you do these once you get the disc, the harder you'll do them, making decisive action key.

And when the disc is coming for you, you have a few options as well. You can dive for the disc, helping with your speed if you're a slower character. You can try to rebound it up into the air, by hitting button 1 right before it reaches you. And if you can do that, or read a lob really well and get under it long enough, you can get a charge for a super move.

Charges are...I'm not going to say they're the core of the gameplay, because they're not, but getting one ups the ante immediately. Once your character is charged, you can do a super shot. And these get wild, because they stop obeying the laws of physics. They might corkscrew back and forth, or snap to the wall of the arena and buzzsaw across to the end, or any number of things.

Super shots, and their cousins super lobs, are super hard to catch. If you're just in front of them without a clean dive or a timed press, you'll get knocked back. And if you're too close to the wall, that can and has for me led to the point still scoring. They can even stun you, springing up into the air to turn into a 2-pointer for your opponent...

Unless, of course, you catch them just right. Because if you respond with perfect timing, you can keep the disc's momentum, and make your opponent have to get that perfect response or die trying.

And I haven't even touched on the arenas much, where each one has a slightly different layout on the back-walls, and some of them include center posts to rebound off of. All of this makes the gameplay just chaotic enough to be hard to keep a perfect grip on, while still readily rewarding mastery.

It's good shit, is what I'm saying here. Windjammers is good shit. 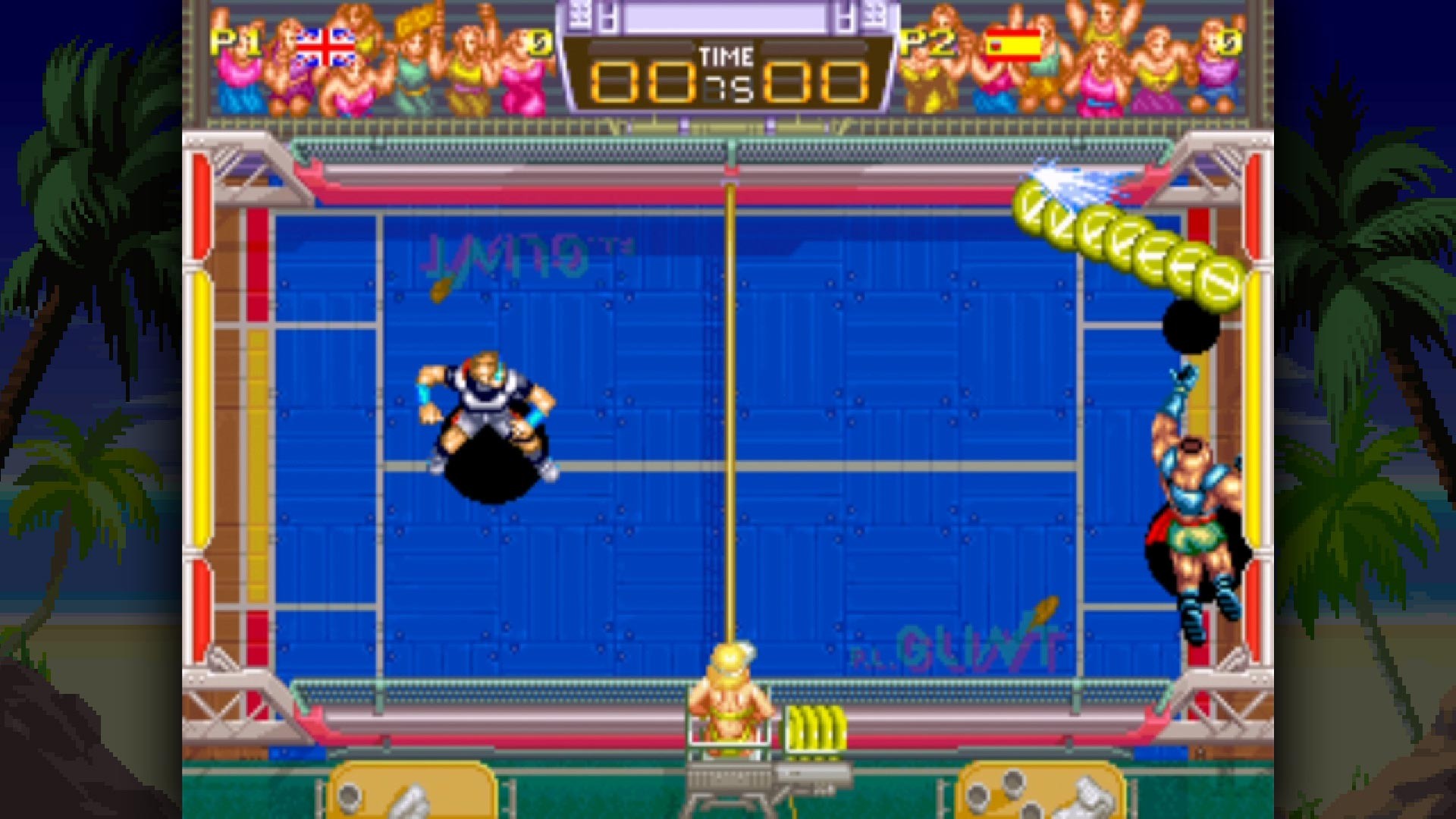 Problems...I mean, there's only one, really. The game's pretty short on single player content. If you don't have someone to play with, either local or online, you've basically just got the Arcade mode to run down. It also doesn't have any kind of training mode, or way to practice different shots in a controlled environment short of setting one up yourself.

But, I mean...It's an arcade game from 1994, you know? None of them had these things, we only realized their usefulness down the line.

Now, if the upcoming sequel lacks these things in 2019, yeah, I'll be a bit more upset about it. But right here, right now, Windjammers is an excellent port of an absolutely amazing game. And while all the platforms are good, I think the Switch might be the single best platform for it. Between the easily learned mechanics, their smooth compatibility with a single Joycon, and the speed of a match, this is one of those games that is perfect for those magical moments where you just set the system down and start playing with someone.

If you've got anyone to do that multiplayer jam with, definitely get this game. And if you've got the option, get it for Switch. You'll love it.