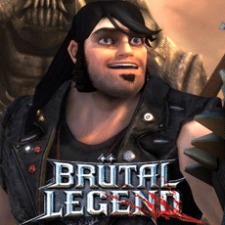 Ran to the Hills

From the mind of Tim Schafer and Double Fine Productions comes Brütal Legend, a 3rd person Action game rich in combat, imagery and storytelling that delivers lighter-flicking fun sure to melt your face clean off.

Brütal Legend tells the tale Eddie Riggs, the ultimate roadie. The "roadie's roadie", Eddie is the 1st person anyone calls when they need guitars tuned or stages rigged. With a love for hot rods and a photographic memory for every Heavy Metal album cover, and the lyrics those albums contained, committed to memory, Eddie has always felt out of place, like he should have been born earlier, when the music was real.

One night a stage accident knocks Eddie unconscious. With his blood dripping into the belt buckle he wears, a gift from his father, his blood quenches an ancient thirst that sucks him into a world that looks very strange yet oddly familiar, a world where every Heavy Metal album cover and lyric Eddie knows has come to life, a world where the evil emperor Doviculus and his demon army, The Tainted Coil, have enslaved the last remaining humans.

Led by Lars Halford alongside his sister Lita and the mysterious Ophelia, the human resistance is far from helpless. However, what they lack is someone to bring them all together; someone who can organise them and lead them into battle, what they need is a roadie. Under Eddie's command, this barbaric force of hot-rods, Marshall stacks, leather, and chrome will bring this ancient world into the age of Metal.

Brütal Legend's core gameplay is classic Action. From close quarter blows delivered by The Separator, Eddie's blood soaked broad axe, to ranged combat from your demon-slaying guitar named Clementine, as well as vehicular attacks supplied by your hot rod, The Deuce (aka The Druid Plow), Brütal Legend delivers deep, rewarding, fun combat that will have you throwing your "devil horns" in the air.

Inspired by some of the most iconic album art and lyrics of all-time, Brütal Legend features a streaming, open world rich with detail, from mountains made of guitar amps to big block V8 engines rising from the ground, delivering a world truly unique and unlike anything you've seen before.

Lead by Jack Black as the voice of Eddie Riggs, the epic cast of Brütal Legend features vocal talent providing by some of Metal's biggest names, including Rob Halford of Judas Priest, Lemmy Kilmister of Motörhead, Lita Ford and more.

Take the Metal madness online in Brütal Legend's Multiplayer mode that combines action combat with a strategic unit-control mechanic that allows the player to direct their army in The Battle of the Bands, where the ultimate trophy is survival

Gain "Lighter Tributes" throughout the world and visit The Motorforge, where you can upgrade The Separator, Clementine and The Deuce to make them even more lethal on the battlefields

Known for creating a level depth and humor in his characters, Tim Schafer is consistently recognised as one of the gaming industry's premier designers and has written such classics as Full Throttle, Grim Fandango and PsychoNauts.

Brütal Legend will feature a fully licensed soundtrack that includes some of the greatest Metal and Rock and Roll songs ever assembled.