The Sonic Frontiers free Monster Hunter DLC is out

An epic crossover, that’s for sure. 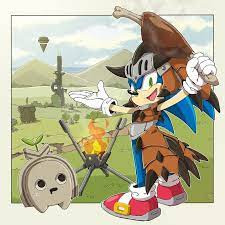 Sonic Frontiers can be considered a success based on the reviews and sales records that we’ve seen thus far, and while most 3D Sonic games tend to be polarizing, people seem to be loving Frontiers. Sega decided to use the momentum and give people new content to enjoy (as free DLC).

Sega and Capcom have just dropped a free Monster Hunter DLC that sees our favorite blue hedgehog stepping into the Monster Hunter series. The DLC brings a brand-new outfit and even an additional minigame. It’s not a lot, but if you’re still playing the game and you’re aiming for that sweet 100% completion, you don’t want to miss out on these lovely extras.

The new DLC is an addition to the free SA2 shoe DLC, which is up for grabs for everyone until January. Both of these additions have been more than awesome and we can only hope more of them are on the way.