You can expect stories, spice, and chaos. 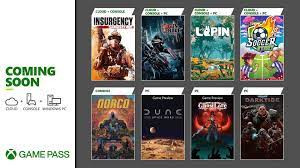 Xbox have released the full lineup for their late November Xbox Game Pass offer and it looks awesome, to say the least. In short, you can expect lots of historical mysteries, space wars, and of course, you’ll have to fight really hard to survive in some of these games.

The first two games on the list are Somerville and Pentiment. The first one is an intriguing sci-fi thriller while the latter is a true historical fiction mystery developed by the folks from Obsidian. Both games are well worth your time.

The Game Preview version of Dune: Spice Wars is coming to PC Game Pass on November 17. This 4X strategy game set in Frank Herbert’s Dune universe is a real banger and it’s yet another game that is definitely worth investing into.

You can see the full lineup here: