The new player experience to No Man’s Sky is vastly different to the one that came before it. We take a look at what you can expect from the game in 2022.

No Man’s Sky launched in 2016 and it was basic, I still loved it, but it was basic and many people felt let down by the game’s less-than-stellar launch state. I once described it as a space game equivalent of an ‘Executive Toy’ yet I still really loved it myself. 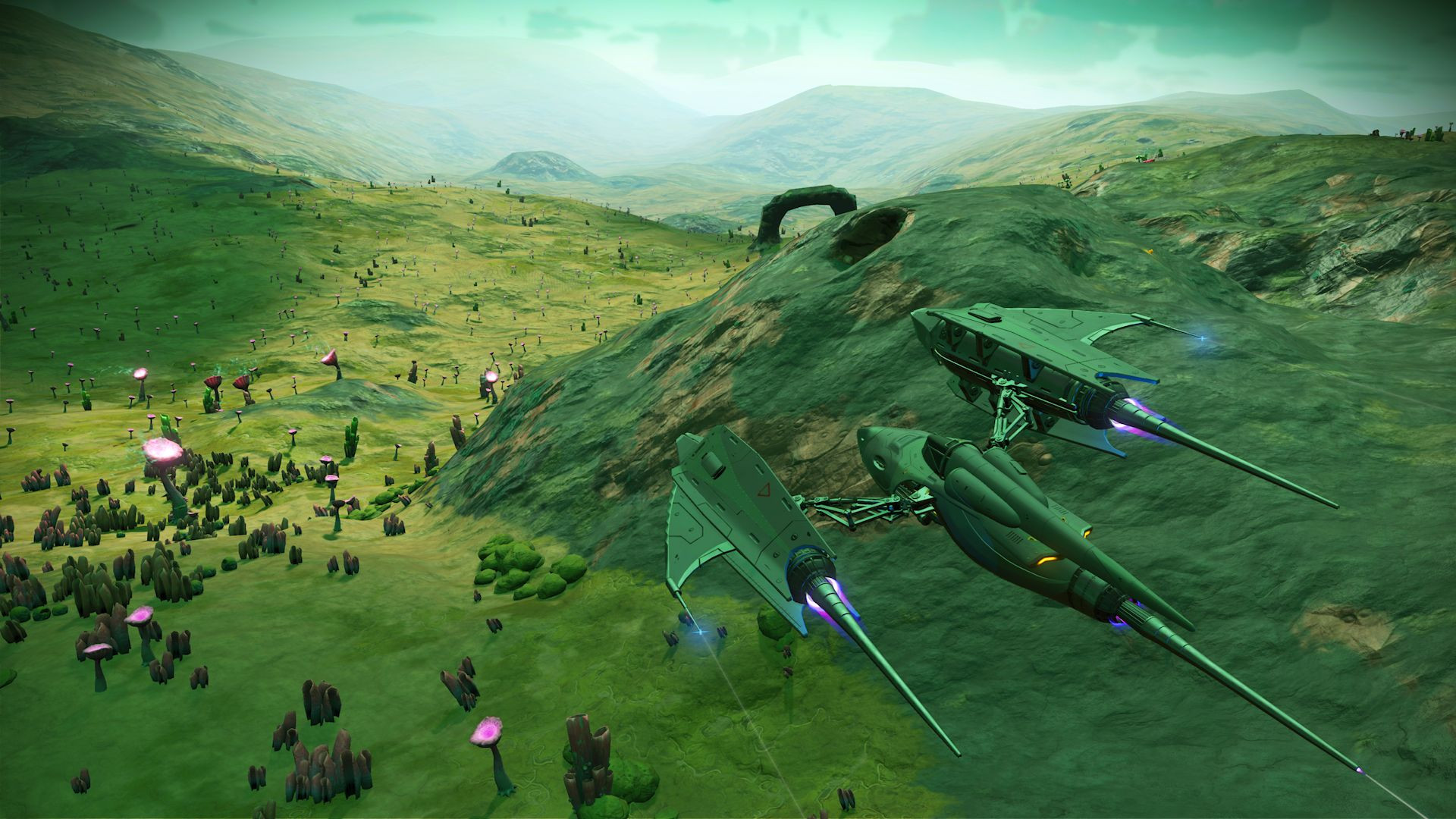 2022, 20 updates and 6 years later No Man’s Sky is nothing like the launch title and has taken off in a huge way, backed by passionate fans, supported by a team of developers at Hello Games under the engaging eye of Sean Murray, the game has become something of a success story.

This is not the story of how No Man’s Sky rose to go beyond anything it ever promised in the interviews.

A little before it’s due to launch on Nintendo Switch and potentially hit us with the much-awaited 4.0 release.

The new player experience to No Man’s Sky in 2022 is vastly different to the one that came before it, the game’s a lot easier now, onboarding is much better and you can start to really see the strides that each and every update has brought to the table in terms of Quality of Life and features.

If you’re curious about all that, I’m just going to leave this work of art here: https://www.nomanssky.com/release-log/ - each major entry to that page has a linked page which is incredible detailed, shows all the new features, and gives working examples of the tech and gameplay changes. It’s the most detailed account of the way a game’s evolved I’ve ever seen.

That’s not why we’re here though. 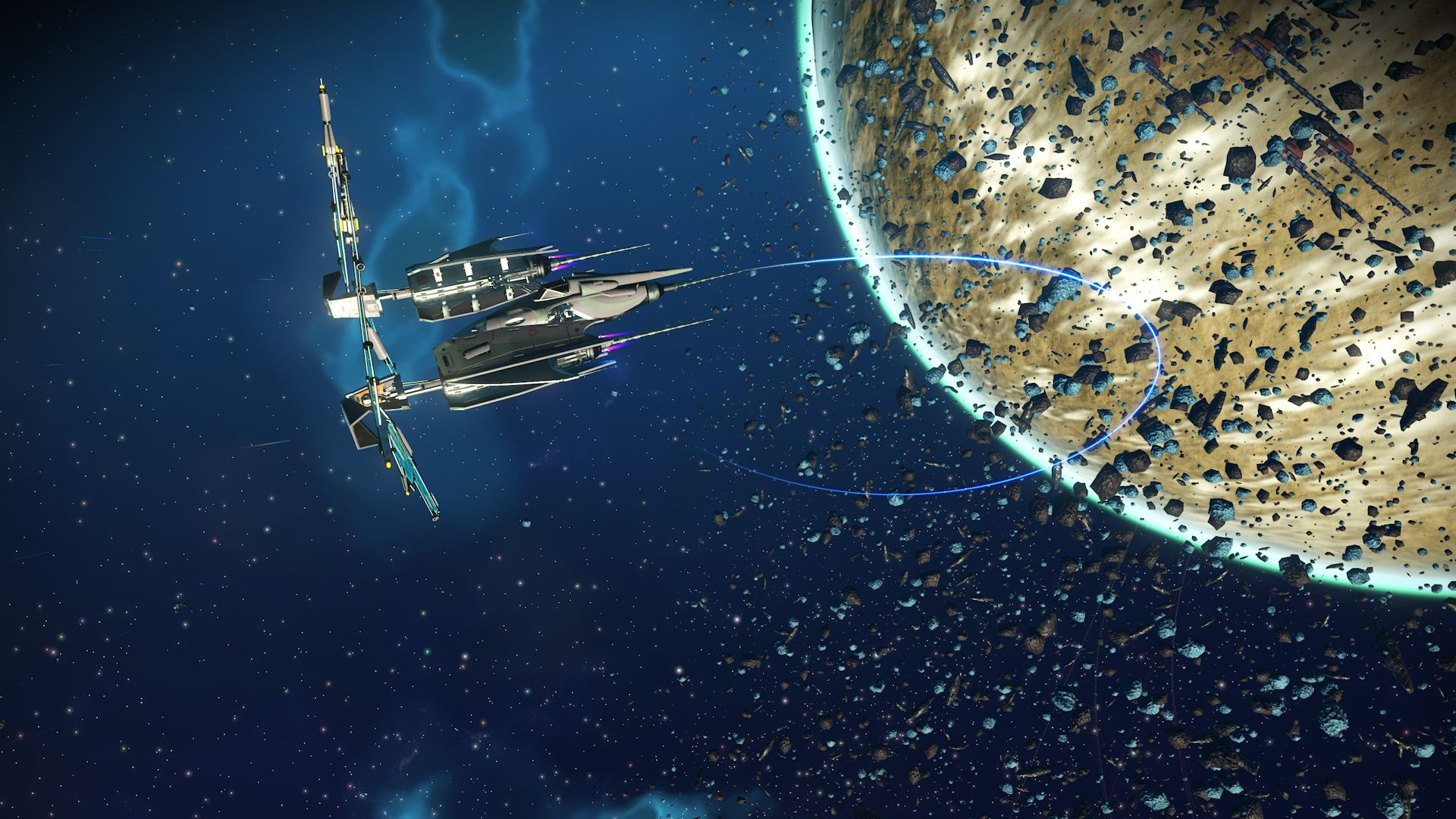 I’ve been playing since launch, and I’m still playing now, through Normal, Creative, Survival saves and when they happen, the community Expeditions which unlock new goodies to claim at the in-game Quicksilver store (more about that in a bit).

It’s also good to bear in mind that every single update and addon to No Man’s Sky has been free, 20 free updates over 6 years and a phenomenal amount of content added to the base game.

I have a checklist of things to do when I dive back into No Man’s Sky, once I get a few spare minutes/hours in the day. I’ve got a plethora of things I can go check on, all of it feeding into the money-making aspect of the game, and supporting my journey as I head to the centre. Only I’m in no hurry to get there and I’ve amassed a small fortune (not small by any means) of Units (the game’s money) and Nanites (an upgrade/money currency). 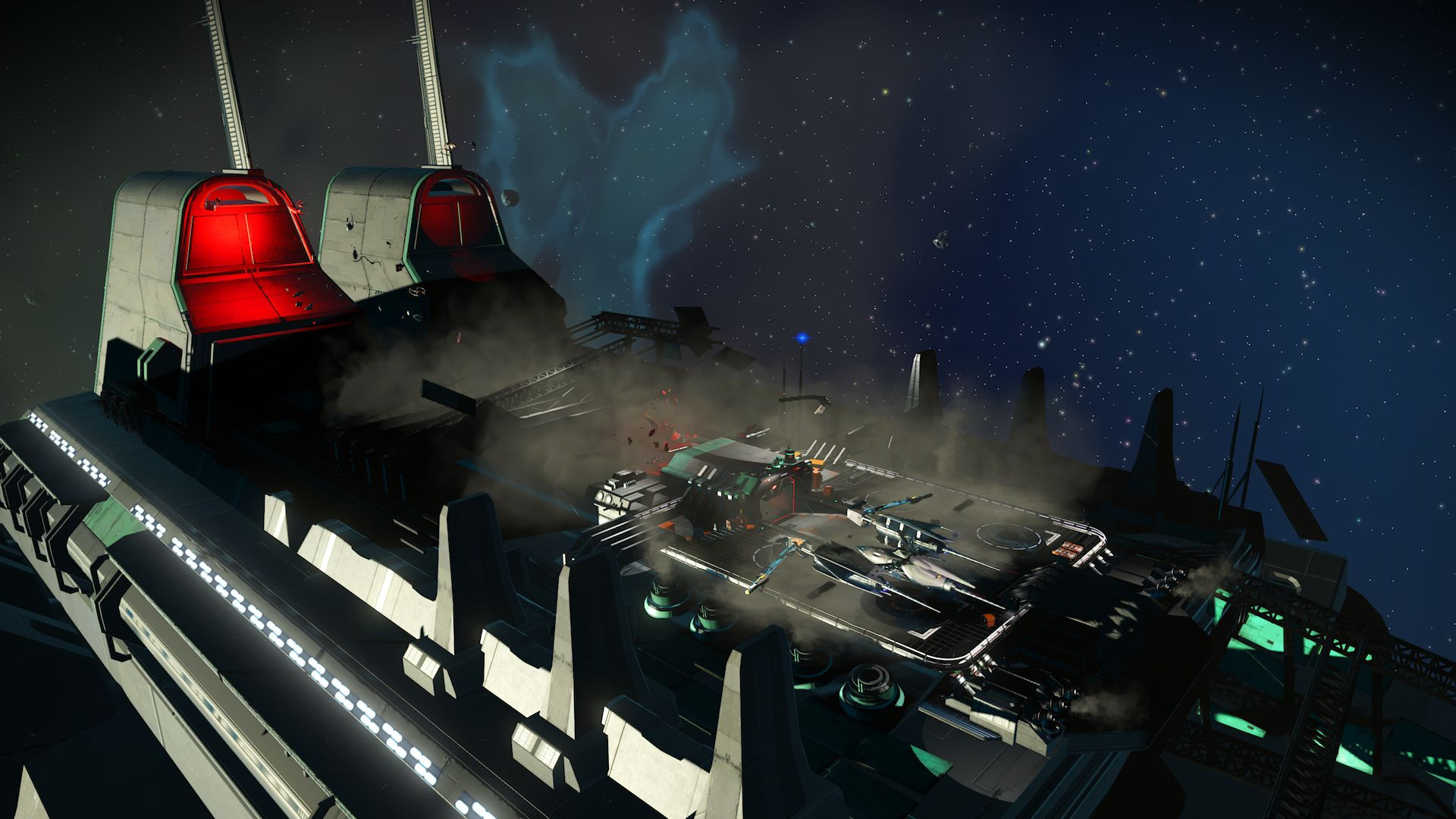 From a lonely stranded traveller on a hostile planet, to a commander of a huge fleet, a squadron of AI pilots, and a freighter packed with rooms and NPCs who all wander around and give me their thoughts/feelings on the day/their jobs.

For me, the story of No Man’s Sky from Atlas Rising is done, but the adventure on that save is far from over. There are the Nexus weekly missions and daily missions I can do to earn rewards, Nanites and more. There’s the whole multiplayer aspect, which is also cross-gen and cross-play through the No Man’s Sky friend’s list and the Nexus itself. When networking is enabled, the game allows you to see other players appear in world, as they’re exploring and travelling, as well as see their bases and meet them on the Nexus (the in-game station which acts as a huge hub for many thing).

There’s the exploration of new systems, made even easier now by the revamp to freighter ownership and the inclusion of a system scanner room, which lets you arrive in a system, scan all the planets and get information on them without needing to visit each one and land.

I can visit the trade stations of the system, pirate or otherwise, undertake missions, shop for new upgrades, and even upgrade my ships and their components. I can land on a planet, deploy one of my many owned exo-craft and just explore to my heart’s content.

I can engage in space combat, with revamped accessible combat systems, and this can be defending ships from pirate attack, or being a pirate myself. I can go and mine asteroids, as I can also watch NPCs doing the same.

I can set goals, and meet them. Perhaps I want to establish a new base on a far-off world I really like, it’s rich in certain resources and some of those are needed to make the item I want to sell. I can set about forming an automated system to harvest that resource, be it gas or a more tangible one like copper or indium. 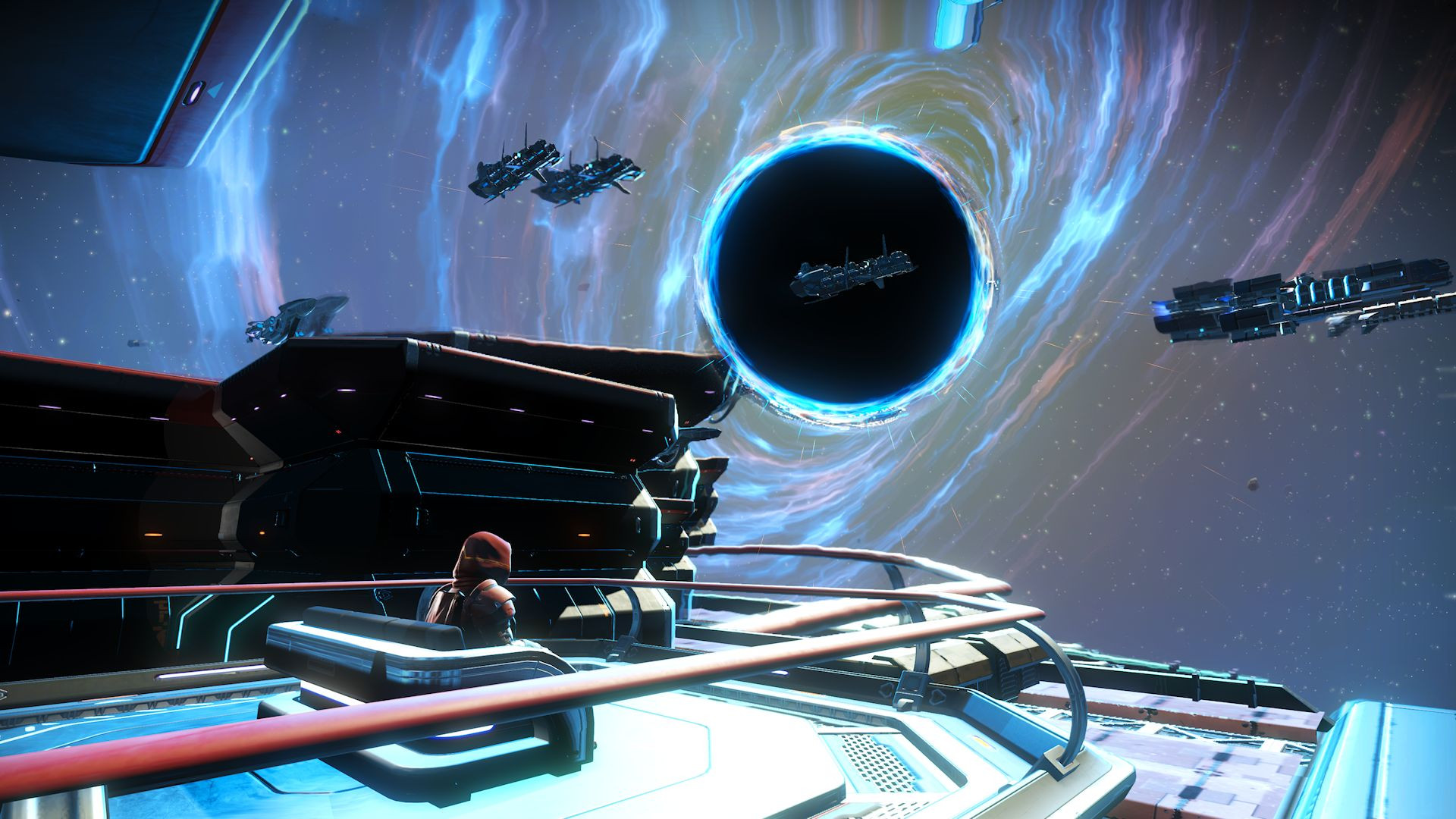 I can build electromagnetic generators on power hot spots so my base doesn’t need bio fuel, or solar to run. With my automated extractors running at full, I can return now and then to collect the resource for crafting, storage, or sale.

All the while, everything I do improves my traveller in some way. I can get new modules for my suit, increase my protection to hostile worlds, and allow me to breathe underwater for longer.

I can shoot off into space, find a derelict freighter via chance, or by getting a beacon to lead to one. These then become small bite-sized procedurally generated space dungeons, with hazards, their own in-built stories and lots of loot to collect.

I can improve my base on planet, or just build a few tiny liveable outposts and focus my main HQ on the freighter I own. Expanding it, building new rooms, and even a farm aboard so I can grow the plants to harvest for the resources I want to feed into the crafting/upgrade system.

I become a nomadic wanderer, with a fleet of ships I can send off into the stars for even more rewards and secrets. Stopping to explore a system, see the sights, and move on.

Perhaps I want something else too, a settlement I can call my own, with NPCs I can support and have a say in how the settlement develops as I defend it from enemy attack. I can, because one of the updates to No Man’s Sky did just that – gave us a settlement we can grow and in turn take the materials it produces for us to further enhance the character, or provide money and resources.

With so many small stories, quest lines, hidden secrets, living ships to own, and more to find out there – in 2022 already No Man’s Sky is doing things in a big way which it never promised as part of the whole spiel. It’s doing a lot of things better and earlier than the big-budget titles, and huge teams. 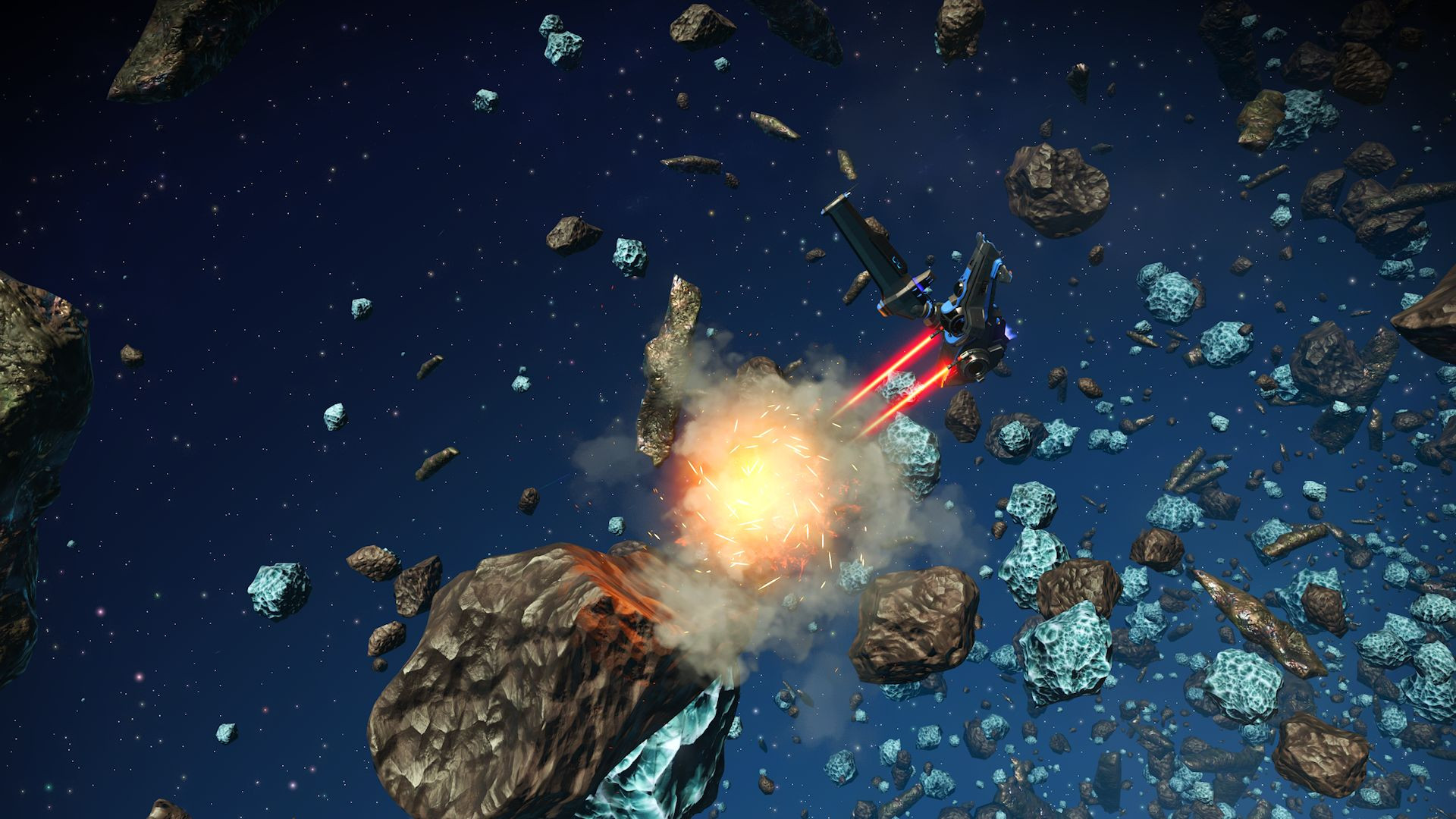 The game in 2022 is a testament to Hello Games, and Sean Murray’s passion for their project and their love of the game itself. It’s only going to get bigger, better, and richer from here on too – because Sean has said many times – they’re not done yet, not by a long shot.

The sky, space, and the stars are the limit for Hello Games’ no longer little game, and I can’t wait to see where we land next!

No Man's Sky: NEXT