If you loved Wipeout back in 1995 then you'll love this.

By JamieHendrixRob | Version reviewed: Xbox One

As always, many thanks to R8 Games Limited for providing a review copy for us to experience this game, this review will be based on the Xbox version.

First off before we begin let us address the familiar elephant in the room when it comes to this game. Wipeout, which came out in 1995 for the PlayStation 1 (the year I was born) and it is still considered a classic, as a child I never owned the full game but I did have the Demo One disc, remember that? With the T-Rex and Manta Rey playable tech demos? Good times. 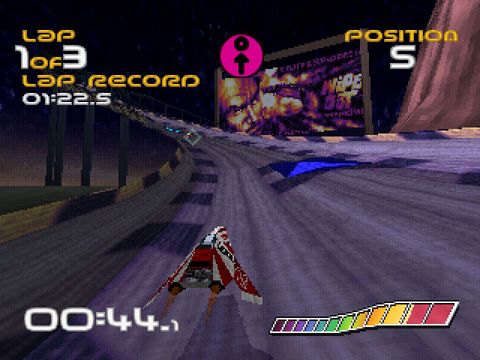 If you enjoyed Wipeout or you don't own a Sony product and would like to try this kind of game then this is the game for yourself. The racing in Pacer feels absolutely incredible, especially when you are travelling at speeds in excess of 900 mph. Handling your craft definitely comes with a bit of a learning curve as the controls I assumed would be the default turned out to prove me wrong. The majority of courses feature some seriously tight corners and huge dips that you'll need to get used to, to make sure you get the most out of them. You can drift round bends, and there are various speed boosts to ride through that grant you a quick burst of acceleration. Making use of these at particular points whilst trying not to crash is a skill that comes with practice, and it takes time to start finishing in first place.

The developers of this game really took the time to tailer your craft to how you like it with a wide variety of customisation options at your disposable ranging from looking like a sleek, elite racing craft to your grandfathers shed that hasn't been touched in years. You'll need to make some tactical choices such as the teams you'll want to join as this choice can depend on the weapon loadouts and performance enhancements, you'll have available so rather than pick anyone make sure you do your research first to suit your better playstyle to ensure victory. Like I mentioned earlier the learning curve is quite noticeable, it took me a while to get used to it because the controlling of the craft can be intense, you've got to work to the team's goals such as some teams wanting you to come in first place whilst you have others that would rather you not use any weapons at all so it can be a difficult choice.

The customisation and enhancements mentioned earlier are acquired with credits to improve your crafts handling, defence and acceleration, all mandatory to remain alive and successful. You earn currency pretty easily in game (even in a quick race event you still earn credits) knowing whether you should focus on improving your performance or weaponry can really put you on the edge and sometimes it pays off and others you'll think twice. You have a vast number of weapons to choose from and you can choose 2, you can pick things like focus lasers, miniguns, tracking rockets and so many more and even tether to nearby opponents to consume their shields and leave them vulnerable to incoming attacks.

One of the main things I picked up while using the weapons is that they feel too weak. You can launch a lot of rockets at someone ahead and you'll find that it's just stripped their shields where in reality it should literally blown them to kingdom come, the weapon systems are fine in themselves but the skill comes more from the racing aspect, you controlling your craft is essential to victory. The range of tracks on offer are varied, featuring futuristic cities, wintery industrial Russia, and dirt tracks set in the heartlands of America. Visually, the game stands out as one of the best, with defined courses and detailed environments so there's always something really pretty to look at, not that you'll be able to much fending off and catching up to your opponents.

The different modes you'll have access to are nicely varied. Flowmentum sees your craft get faster after every lap, Storm creates a dome around the track that must be stayed in or else your craft will become too damaged. Other modes are based around destroying fellow crafts, eliminating last place after every lap, and the good old fashioned 'finish first,' but Flowmentum and Storm definitely are the two standouts. You can take part in Quick Play, which allows you to play on any course (providing you've paid credits to unlock it) with any craft and loadout, as well as other options such as racing at night or playing the course mirrored Mario Kart style.

Speed is the main factor here, and there are numerous speed classes to choose from: F1000, F2000, F3000, and Elite. It takes hours of practice to even finish a race in Elite, but that's the point of Pacer. Racing is such a blast, and the dedication to improving your skills as a racer is what will take up your time. You can also race up to nine other people from around the world and compete for bragging rights on the leaderboards, however, I would suggest getting that much needed practice in first.

So, to wrap up, great racing game, definitely comes with its learning curves, could definitely do with a damage boost on the weapons and it is definitely a treat to play online, even if you do constantly lose and crash but that's ok because so will everyone else. The score is even done by CoLD STioRAGE AKA Tim Wright and the songs themselves really keep the momentum going and fit in with the racing perfectly, if you loved Wipeout you need to get this game.