You've gotta pluck your Pikmin yourself, that's how you know they're fresh.

Okay, so, Pikmin 3 Deluxe! These Wii U ports are kind of an interesting beast to tackle value-wise, because...Well, bluntly, you probably don't have a Wii U to play the original on, and you're not actually going to save much money even getting a full suite of the games that started there and got ported to Switch. 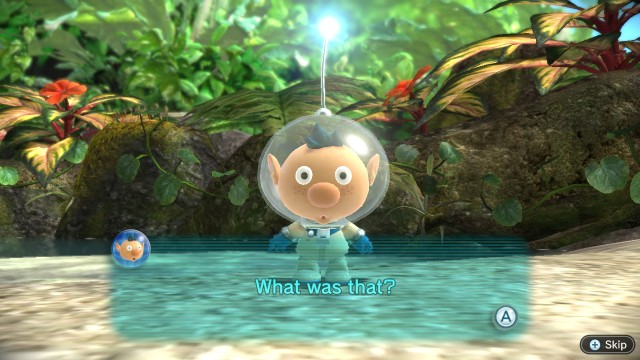 But let's deal with that elephant in the room real quick before we get into the meat of the review. If you actually have your Wii U still hooked up, and the original Pikmin 3 for it, there isn't a ton new here. They added some cool stuff, but not "buy it again at full price" levels of new.

...On the other hand, that's like three of you folks reading this, tops.

So for everyone else, who at best had a Wii U at some point in the past but far more likely just straight up missed the entire system, this is basically a whole new game! So taken in that context, how's it work out?

Now that's where things get exciting.

The ABCs of juicing

Have you ever played a Pikmin game before? The basic idea is pretty simple; You, as a little astronaut, land on a mysterious planet full of hostile wildlife, abandoned treasures and artifacts of humanity, and the curious but eagerly obedient creatures, the titular Pikmin. Little plant beings that follow your leadership, eagerly fighting battles in your name and hauling materials back to your ship...Or their birthing place, the Onions, which will produce more seeds from the raw mass of fallen foes and the like. So the gameplay ends up being this sort of pseudo-RTS with you right in the middle managing everything, instead of a birds-eye view from on high. 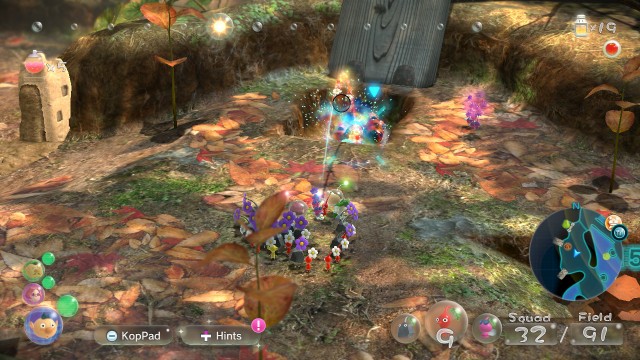 Pikmin 3 changes things up just a bit. For starters, your primary thing to recover isn't artifacts (though there are some you hunt for), but fruit. See, the first game's entire campaign had a 30 in-game-day timer for protagonist Olimar's rations and air supply. Here, instead of having a hard timer, you're largely trying to buy yourself time with more food to consume. Each piece of fruit brought back to your ship gets juiced, and each day you drink one bottle of juice as your ration.

As for the air supply?

Well, see, the folks you're playing as this time don't have to worry about that, as far as I can tell. Because instead of Olimar, you've got Alph, Brittany and Charlie. Tasked with finding a food supply for their people, the trio fight on in the wilds of the mysterious planet PNF-404 for the sake of all of those counting on them...

Yeah it's a bit of a thin plot, but it does the job and it's not what we're here for, besides. We're here for gameplay.

And the gameplay's real solid. One big thing here is that, as the game was originally designed for the Wii U, we've ditched the first two games' right-stick sweeping for...Well, a whole bevy of options, actually. There's a whole setup of gyro aiming, but if there's one thing you should know about me by now, it's that I'm incredibly bad at focusing and am liable to go off on tangents that I have to edit out of the manuscript.

If there's two things you should know about me by now, though, it's that I really don't like always-on gyro aiming on a controller I'm also manipulating the buttons on. It's just a little too "rub your tummy, pat your head, and hop on one foot" for my liking. 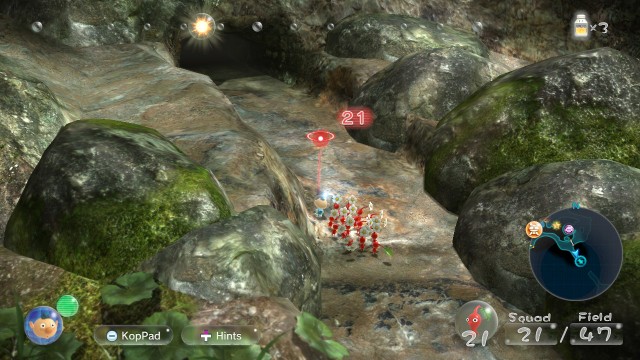 Luckily, there's the all-buttons setting, which is how I played the game. But the important thing to understand here is that you don't sweep your mob across a problem anymore. Instead, you either throw them one at a time, or you lock onto a target and command a whole color section to charge! And this is particularly important, because the game has you dealing with more specific Pikmin traits than ever; while the white and purple Pikmin of 2 are gone, now we have rock Pikmin who can break crystals, and flyingPikmin who can navigate multiple types of terrain, attack flying enemies straight on, and circumvent certain hazards entirely.

It can be a bit much, at times. Of course, this is also part of why you have three playable characters on a map. While the interface isn't quite perfect (I'd fight someone for a way to break off squads in the map menu, or even just send one of my crew off somewhere without having to switch to them first), being able to send Charlie with all the blue Pikmin to go sort out some water hazards while Brittany marches across the map to start gathering spicy spray with the flying boys, and I have Alph back at base to gather up any Pikmin who end up there waiting for new orders, is incredibly useful at controlling the chaos.

There is one wrinkle to this, of course.

You don't actually need to do this very often in your initial run of the game. Or, like, almost ever. There's all of one or two stages in the core story where you can't solve most of your problems by just kind of marching your mob around as need be, with the occasional round of sitting all the drownable Pikmin in the corner for a few minutes.

But! This is actually where that side content comes in. Between the game's mission mode, as well as the two Olimar-starring side stories, things get interesting. Because these are all time trials on fairly strict limits, and you often only have Olimar and maybe his crewmate Louie, you don't have the luxury of brute forcing things. You need speed, and that means efficiency. Breaking off squads to solve multiple problems isn't just a way to outpace the curve; it's the only way to keep up with the clock. 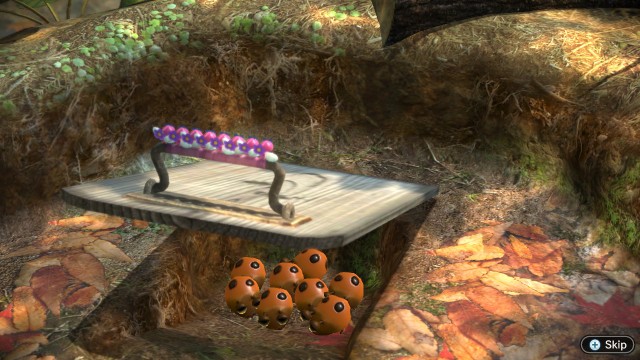 It's this ostensible side content that shows the true nature of the Pikmin franchise. Because these aren't games you're meant to beat once and put away. They're an arcadey type of exploration and experimentation. You're supposed to come back and try to beat your best times; to tackle things on new difficulty levels; to try and achieve the 100% speedrun, which apparently can be done in ten in-game days and that has to be with co-op. There's no goddamned way you can do that in regular single-player, even if it's just one person controlling both sets.

I didn't get to test it much for obvious reasons. Heard great things, though. 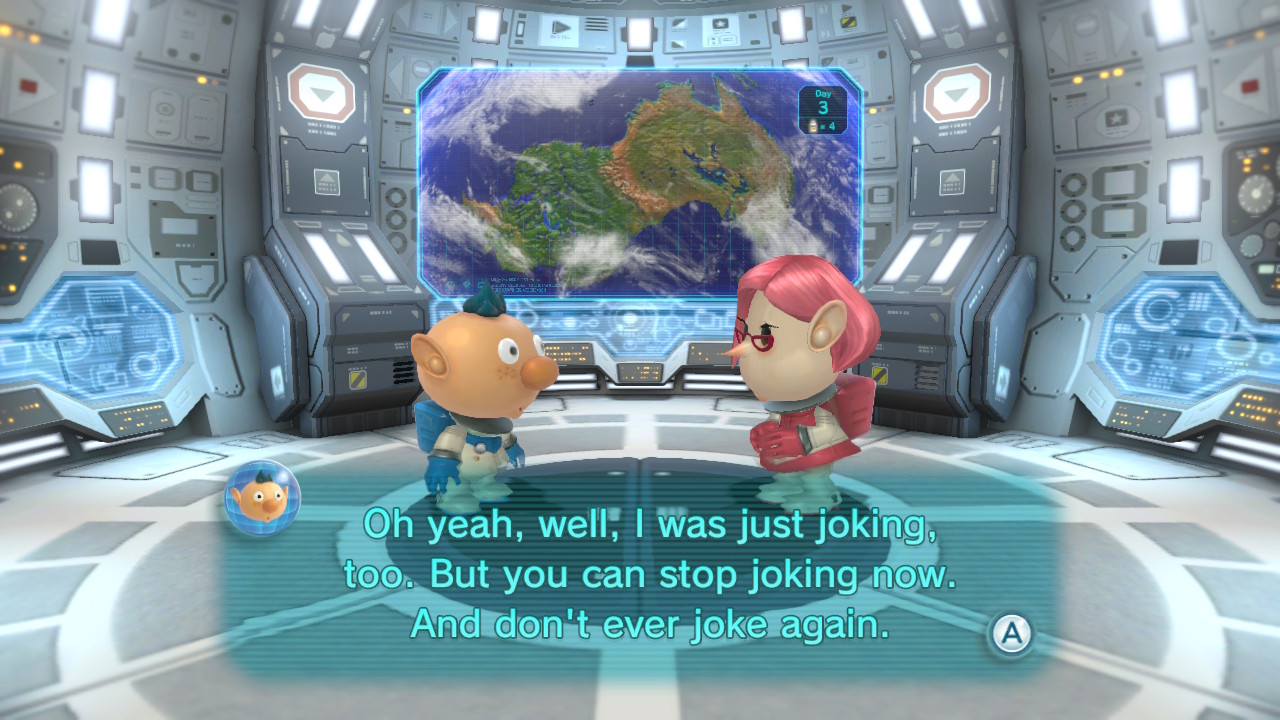 The thing with Nintendo games, of course, is that they're deeply polished experiences, which makes it a bit tricky for me to talk about flaws. There are things I'm not super fond of in the game's design, right? I think the final boss is a challenge a bit too unlike how the rest of the game works, for instance. And the story is fairly slim, paced kind of wonky, and can be gotten ahead of a bit too easily.

But these aren't...Like, they're not bugs. The game never crashed or missed a beat, it never acted weird. They're decisions I don't agree with, and that's a bit harder to pin down. Especially when, like I said earlier, this is secretly a game of speedrunning and arcade style mastery through knowledge. I hesitate to get into "the dog doesn't meow" style complaints, you know?

Really, I think the biggest thing I'm left with is I just would have liked to see more new stuff here. I know that's not really the goal of these Deluxe games. But it hurts the value proposition if you compare it to the original.

...Then again, I also pointed out you probably didn't play this when it came out the first time. And if you pretend this is the first time this thing came out, it's a pretty damn solid buy with a lot of good meat on the bone. And of course, given the way the series has gone? If you did play the original, you're probably the kind of super-fan who'd buy this regardless.

So yeah! If you're at all open and curious about the game after trying the demo, I say buy it. Even with its quirks, it's still a great experience I'm glad to have played.