It's dangerous to go alone, take this.

I was told to expect a trick, but what a treat I've been given. 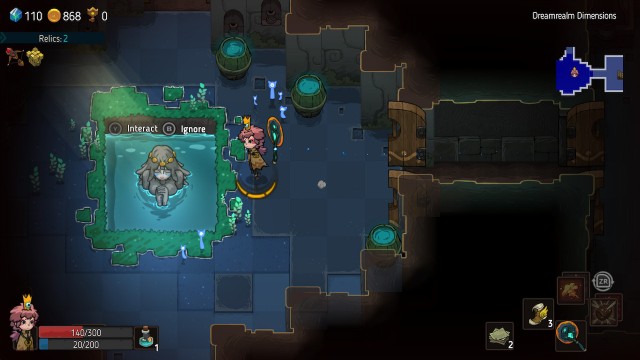 So, Crown Trick's a roguelike-ass roguelike, as the vernacular goes. Like, yeah, this has randomly generated stages and loot...It also has a synchro turn based setup, movement on a grid, total loss of loot and a baseline starting point for each given run. Like, the only thing that they've decided to break from that core design ethos on is letting you have some persistent upgrades, and unlockable loot tables, and I'm not entirely sure those haven't been folded into the core by now.

But, it's one thing for a game to include all the pieces of its genre. It's another thing to ask if the game executes on them well. And I can tell you, right now, Crown Trick does some pretty cool shit within that space.

Let's get into it.

You've got a pretty straightforward setup at the start here: Young maiden Elle wakes up to find herself in a nightmare realm, as you do. And the only one she can rely on, if not exactly trust, is a talking crown who can actually strike and harm the beasts of this land where Elle cannot. The goal is simple: Wake up. But getting there means cutting through all the horrors of this nightmare...

Well, okay, horrors is a bit strong. The art style here is gently spooky, it's not exactly full on terrifying. But it does look fantastic, I have to say, and is a really slick presentation. 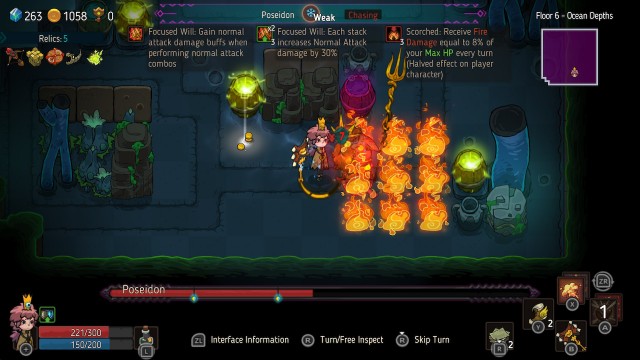 So what are our actual core mechanics here? Pretty classic stuff. At baseline, Elle gets her choice of two random weapons at the start of every run, which have a lot of traits and types. The neat trick they do here is that one of the choices they've made is an attack button, rather than full oldschool "run into the enemy to attack them" roguelike stuff, so every weapon type is able to work a bit differently. Like, swords will hit the square in front of you, plus the squares to either side of it, while spears will hit the square in front of you and forward past that, for instance. There's even ranged weapons, which introduce a whole reload mechanic.

The other big thing you have to your name at the start of a run, and this is one thing that actually stands out in Crown Trick's design, are Familiars. Kill a named, elite enemy, and you get to claim their skills. These are basically your magic, draining MP and having lots of possible effects, and are where you get some really complex and cool things. Like, I have one Familiar that lets me cast a chain lightning spell...But also lets me cast a gravity spell that pulls all the nearby enemies together, so my chain lightning works super better. It's a simple, obvious example, but it all clicks together real nice.

With your Familiars to select also being randomized from the ones you've unlocked, there's a lot of that classic synergy-building loop that a good roguelike loves to work. Do you go for maximum damage with this axe, or do you dial back to take this pistol that has a really cool effect? These questions are at the core of the gameplay loop, and I am here for it. 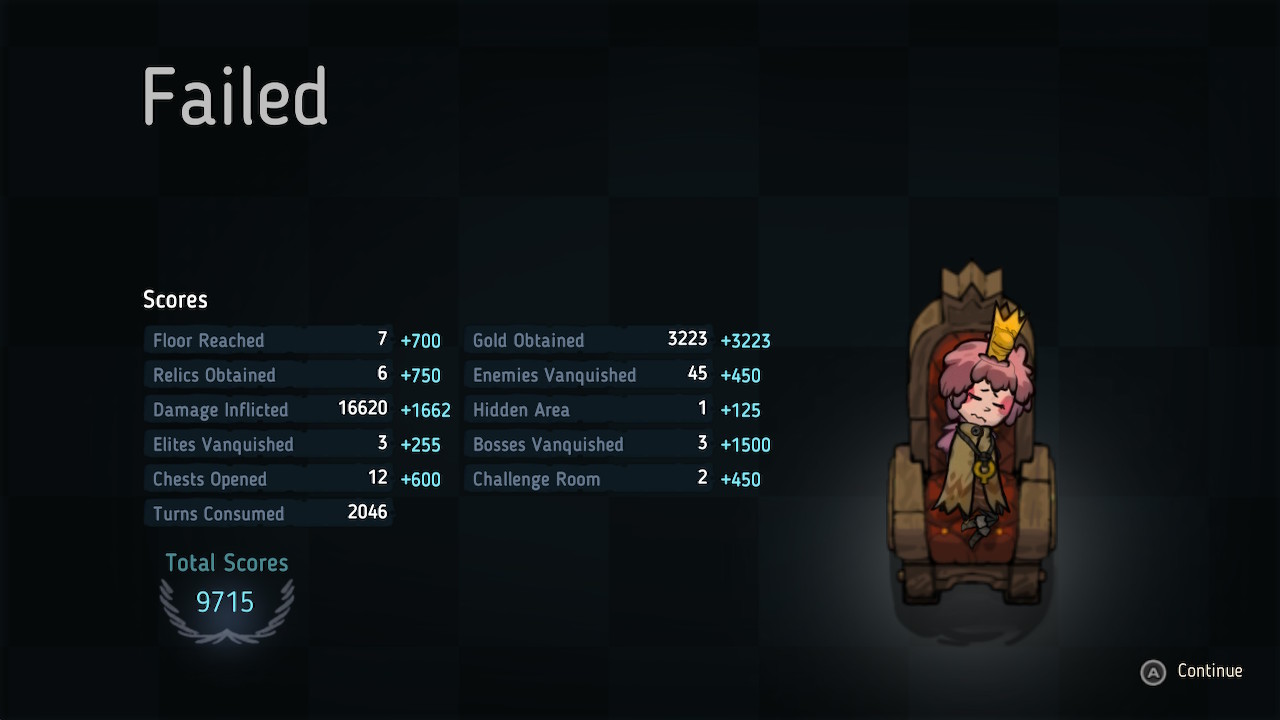 So you've got a lot of these little details that help bring out the specific character of Crown Trick. I already touched on the art briefly, but I think it deserves special mention here. This game is just...Great looking. There's a fantastic hand-drawn quality to the art, and while animation is always a bit slim in a roguelike by their very design model, Crown Trick squeezes in a lot of little touches that bring lots of character to things.

It's a really great touch, and one of the things that makes the game just sing on a big display.

But...Speaking of big displays. There are basically two actual problems I had with my time with Crown Trick, and they both come from a very...PC-first design ethos, I feel like.

The first is, pretty small and simple. The frame rate can sometimes drop a bit on my Switch in handheld mode, and I can hear that fan working. I'm not sure if there's a lot of extra complicated stuff going on in the back-end, or if it just needs some optimization patches, but I definitely noticed it straining the edges of the hardware...Which is weird for a 2D, turn-based game with deterministic and percentile reactions (ie no complex physics engines), you know?

And then the second thing is, so, the game doesn't actually auto save that often from what I could tell. It might actually only be once a floor. Now, with the nature of digital dice being not truly randomized, and thus a floor you quit out on and reloaded your save coming out the same, there's only so much that you actually lose the progress on a given floor if you have to put the game down...But it does make the game quite a bit less convenient to pick up and play for five or ten minutes at a time, if you have anything else going.

On a PC, where you're likely going to have a fairly potent dedicated session and then put the thing away at the end of a run, this isn't that big of a deal. But on a Switch, especially a regular Switch that might be used by multiple family members, to say nothing of the intrusion of lifestyle games that have you checking in regularly...It's a lot trickier to guarantee that's going to hold.

Unfortunately, I have absolutely no idea what it would take to fix these, and how easy or difficult it would be. Neither of them are dealbreakers, but they're, you know, there. 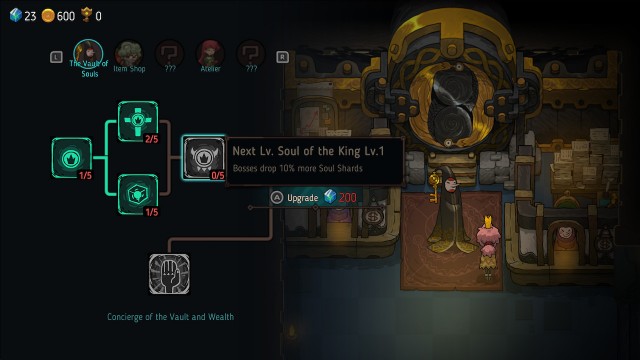 So where's that leave us? I mean, overall, I had a really good time with Crown Trick! It's a classic style roguelike with some solid modernizations. I love the art style, and while its permanent upgrades are all pretty standard stuff (go in with more healing elixirs! Keep some of your currency across runs!), they do a lot to make the genre feel more...Achievable by mere mortal man.

The difficulty has a solid curve, the enemies are fair and interesting, the synergies are well-executed and super fun. Really, the only thing I'd say holding the game back at all is the way it could use some more touches, like a more generous way to quit out without losing progress, and a bit of performance optimization.

But despite those quirks, I'd definitely say it's worth checking out if you at all like this kind of gameplay loop. It's not for everything, but if you're into it, you're gonna have a real good time.