Dogs of the sky.

This is a tricky one. Interesting, but tricky. Where to start...

Okay, so, let's start mechanically. Steam Tactics is a pretty straightforward little strategy RPG, with a style that's not quite full on steampunk, but definitely hitting the more loosey-goosey idea of gaslamp fantasy. With your pilots in planes, the game tries to replicate the feel of dogfights in this format with two interesting mechanical quirks. 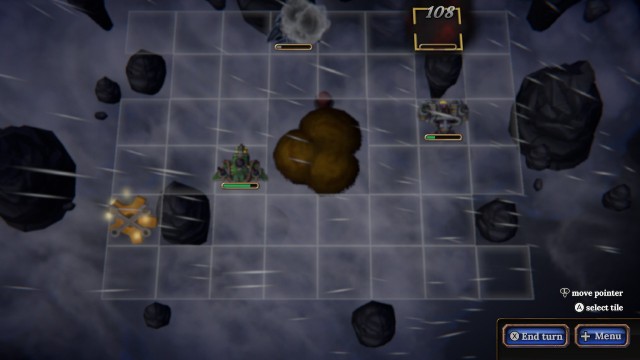 The first, more complex one, is that almost every single weapon is not only defined by the stats it uses and damage it does and such, but also the very specific squares it hits. This gun might do two squares away in the cardinals. That gun might do the diagonals right next to you. THAT gun might do diagonals three squares away!

When these combine together, what you end up with is this constant jockeying for position, where you're trying to stay directly parallel to your enemy and three squares back, but he wants to be a square back on the diagonal, and then there's various blockages in the air like mountain peaks, floating rocks and thick cloud cover that create just a bit of terrain to navigate around...

Honestly, this setup works way better than I thought it would. While it's a bit awkward at first blush, it also makes for a fascinating balance of trying to fit guns that use the right stats (for more power) with the right positioning (so they'll all shoot) while also keeping the weight down (so you have enough movement to get in position).

If nothing else, I want to say that this right here is a huge part of why I came away positive about this game. The other big part...

I just got to talk about world. It's a classic cartoon "funny talking animals" setup in that gaslamp fantasy world. You're not just commanding any old pilot, you're commanding fellows like Benedictus Maximus, who is a corgi. A corgi in a bomber jacket. A corgi full of a young man's belief in his own immortality, and an honorable family's expectations of his greatness. 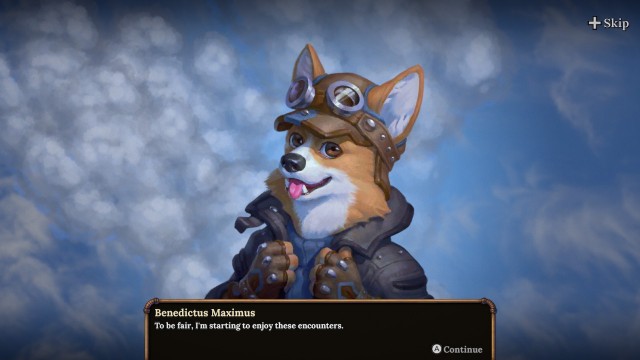 It's so good! And the characters aren't just fantastic concepts, though they are definitely fantastic. They've also been rendered in this loving painterly style that just makes them pop every time we get a dialogue scene. And with a quick shot of continued banter before, and often after, every mission, there's plenty of time to see these heroes work through their baggage on their mission of utmost importance and classification.

The only complaint I have here on the artwork front is there's basically only one portrait per character. I totally understand, art paid at proper rates isn't cheap, but even a couple of expressions like a visual novel would have gone a long way to making some of these cutscenes feel a bit more...lively.

But still, even if we only get one piece per character, it's a piece that just tells you so much about them. Just look at Benedictus. You know everything you need to about that corgi in that shot.

So where's the game stumble, if I find its core mechanical gimmick and worldbuilding so charming?

Mostly it's in the details. The best way I can describe it is that the game feels like the first draft of something that will be really good, if it gets another once-over. 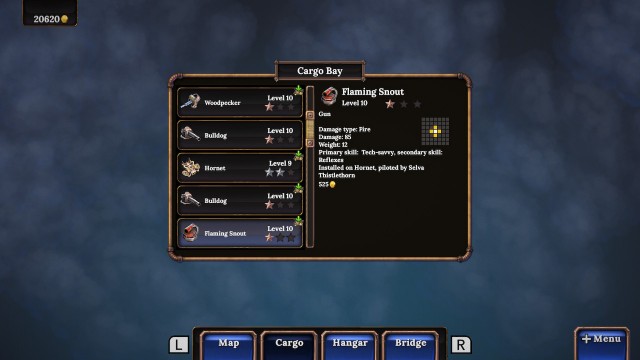 The gameplay graphics are, on the face of it, not bad, but sometimes different planes can look awfully similar...And that's when they're not literally the same model of plane. Trying to create unity in your squad is a fool's errand if there ever was one, because you'll very quickly lose all capacity to tell who's who besides just making sure no two planes can shoot the same relative location, and that feels awkward to play.

It's the menu setup that really hurts this, though, and all in the little things. Like not having a portrait or name when you select a unit. Or how I can't back out of selecting a unit to move, but if I just go and hit A on a different one, it'll just select them instead with no un-selected middle point. Or how the only way I could find to check the specs on a gun I had equipped to a plane was to unequip it, so it would show up in the menu again. Or else, select a different gun slot entirely so I could see it while it was equipped, but then I can't differentiate it from others like it...

These little things, each one of them isn't that bad on its own, but they add up, you know? A lot of little speed bumps on what should be a smooth ride. 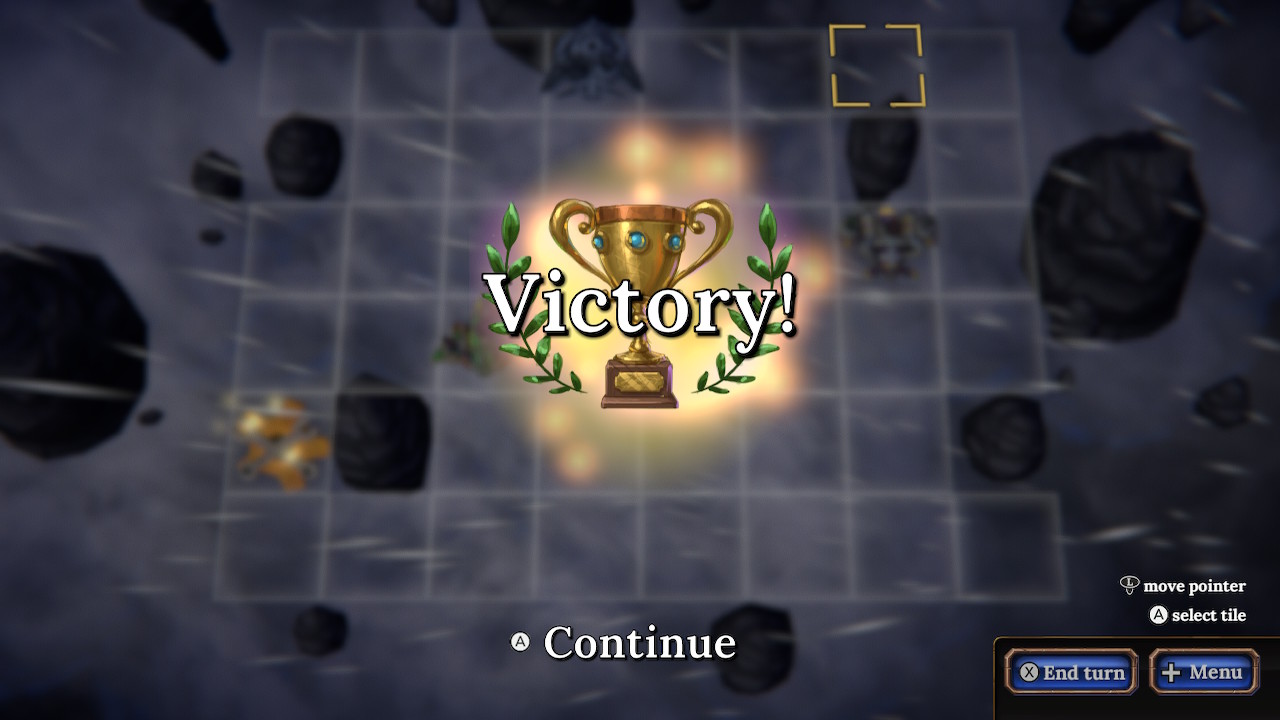 And yet, you can see I recommended the game. One of the things I talk about a lot, is whether or not a game fundamentally works. If its pieces ultimately come together to be fun. I've reviewed games with a lot of jank, more jank than this, that I just had such a good time with that I recommended them. And I've been handed totally functional, well designed games with one glaring flaw that made them totally non viable for me.

What really seals the deal, when I boil it down, is charm. Charm and vision. Trying to do something interesting, different, and with your own spin on it goes a long way for me. And Steam Tactics is doing that left and right. From the positioning-focused dogfighting tactics, to the delightful animal people, to the puzzle-like way you have to untangle the enemy formations at times to get a target in position, it just...It's trying something really cool, and I have to respect that.

Really, the only two things I want are to give it another round of polish, and to push things a little harder. I'd love a larger squad to rotate between, larger maps to navigate, more room to just try everything this game is exploring. More character art, more characters to have art of, just...More, with one more round of knocking the burrs off the mold.

And the thing is, even with the quirks and the flaws, there's no version of this where I can't recommend a game when I so eagerly want more of it, you know?

So, yeah. At the end of the day, check Steam Tactics out. Might not be perfect, but damn if I didn't have fun hanging out with Benedictus Maximus, the corgi with the best possible name.