It's a difficult thing, to kill a man.

I am awash in tactics games right now. I'm playing them left and right, on multiple platforms. I've gone back to play Mario + Rabbids, I'm kicking around some old 3DS tactics games, I'm even trying to get to review that upcoming XCOM 2 Collection* port. And those are just the ones I've started. I have two or three downloaded and waiting for me on various systems, and some more I'm awaiting release on.

And yet, John Wick Hex manages to stand out. How does the game do that, against all the other possibilities on the board? Let's talk about it. 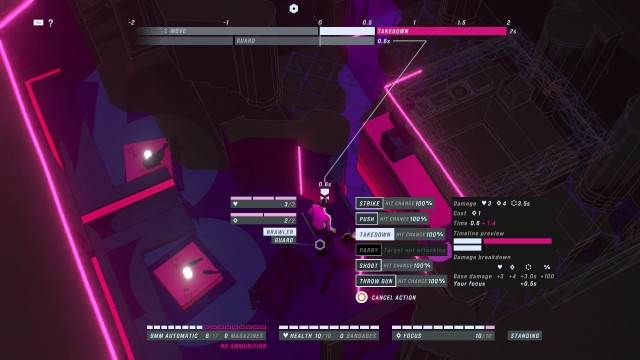 The single biggest thing that makes John Wick Hex stand out is, well, John Wick himself. You only play as the one man, no backup team, no cleanup crew, nothing. That alone creates a strong shift from a typical tactics game, having to manage and watch the back of just one man, and having utterly no room for error.

Then there's the other side of things.

So, okay, tiny rundown on core gameplay loop. You move John around a hex based grid, he has a certain distance he can move in each go, he can stand or crawl, roll, open doors, variety of attacks on a menu, etc etc etc, okay? Okay. Just something to keep in your think meat.

Instead of using a turn based system, the game uses a timeline system. Every single action John takes, takes a certain amount of time. And while time is ticking, enemies are also doing their thing. Patrolling back and forth, chasing John down, shooting him in the face, and so on and so forth. So every single action you take has a great deal of commitment to it, as you can never be sure what things will be like at the end of that effort.

You've got two things that help you.

The first is that the game will cut short your action if a new enemy enters John's sights. (And, as a kindness, enemies will not attack from offscreen. If they can see you, you can see them) So you're never stuck in the middle of an effort, dealing with more than you planned on.

The second, is, look up there at some of the gameplay. See that timeline? Every visible enemy will have their actions up there, complete with how long they take. This guy's moving, you see that. That girl's gonna shoot, you see that. And you can see that, yeah she's gonna shoot, but she needs time to line up the shot, less time than it takes you to duck around a corner...Or maybe just throw your gun into her, stunning her out of the shot, and rush in for a quick takedown. 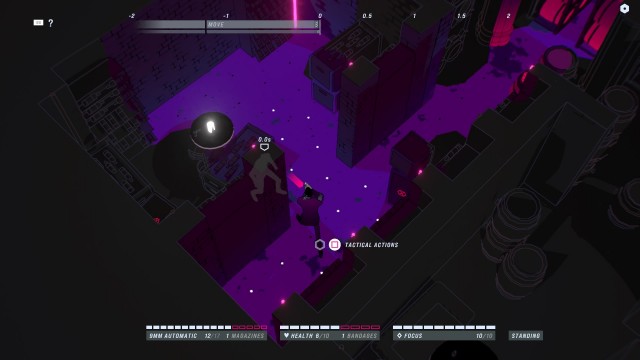 It's in these moments that John Wick Hex most captures the idea of being John Wick, the most terrifying assassin in the entire secret society. When you have three grunts coming your way, and need a solution that takes less than two seconds, and you need one now. It feels good to pull something off, to shoot that guy, draw that guy around a corner for a takedown, crouch and roll out to strike that girl before she can draw a bead on you, and finally shoot the guy entering the room just as you finish it. It feels good, and in the replay it looks good, too.

...Of course, this can also go hilariously wrong. I had one mission, a boss fight just turn utterly slapstick, as the best way for me to deal with the boss was to draw him out into the main lobby I'd killed all his underlings in, and then just kite him around while throwing guns at him until he was vulnerable to being shot properly.

It worked, but it just, looked, ridiculous.

And looking ridiculous also can come up in the game's replay sections. Because the game leans on canned animations and is bound to its hex grid, John can sometimes walk in very, very strange ways if the angles don't line up right. This isn't a big deal in actual gameplay, but it, and the lack of any formal cover system, make the whole thing just look a little...Strange at the exact moment that the game is most trying to sell you as a boogeyman right out of a dark children's fable. 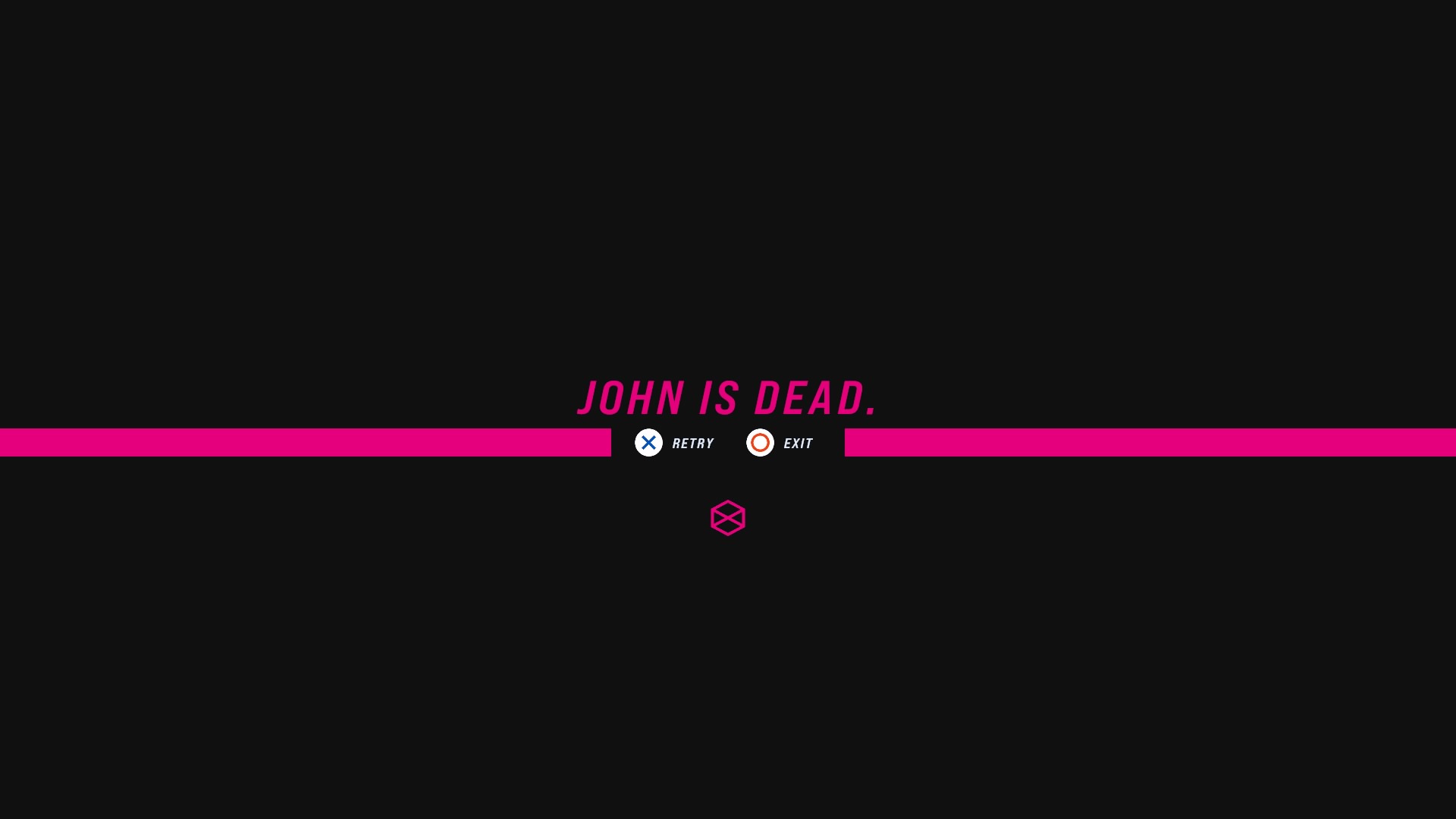 Really, that's kind of the back and forth I keep finding myself in as I write this review. John Wick Hex's gameplay is superb. I haven't even talked about this fantastic little planning stage where you can stash gear in different levels of a mission, balancing difficulty in dropping it in with usefulness in the conflict. Or there's the speed mode where the game only gives you seven real-world seconds to commit to an action before it starts rolling the clock forward on John, making you really feel like you have to think almost as quick on your feet as he does.

But the presentation, the way the game acts when it most wants to give you a shiny gift, gets...Wonky. The replays try and do this whole cinematic camera thing with a thumpy, bassy soundtrack, but while it gave me some really cool shots from time to time, the stiff animations just made things look more like I was watching a John Wick episode of Robot Chicken. 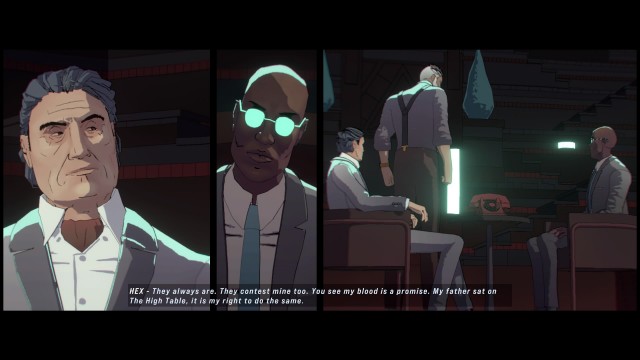 And the cutscenes, well, they're a thing. They're basically the 'motion comic' style that was popular on the PSP back in the day, if you remember how the portable Metal Gear Solid games looked. The whole thing feels motion comic-y, in fact, with the characters done in this blocky, cel shaded style that feels somewhat in contrast to the John Wick aesthetic.

The overall presentation ends up feeling like...Well, the best way I can describe it is it feels like one of those really high-end, buy-once mobile games, the sort of thing where the developer would be doing handheld stuff a few years ago but doesn't quite have the budget to go up to being on the Switch, let alone the PS4.

Now, that's not a terrible place to be. I've played a lot of really good indies that sit in that space, even some of the things I've reviewed and recommended to you. But it's just a bit odd for John Wick of all properties to end up there, a series that prides itself on its intense aesthetic.

So where's that leave us? Is it good, is it bad?

I mean, for me, here's the thing. The funny replays and the odd fit of the graphical style don't take away from the core fun of the gameplay. Gameplay is always the thing. And the gameplay here works. The timeline based system, while not the first time I've ever seen it, is a real rarity in the tactics space. And the specific touches done in this game, really make it sing when all the pieces come together.

It's like home cooking. The best home cooked meal isn't plated the fanciest, it doesn't always have the ingredients perfectly chopped to uniformity...But damn if it isn't tastier all the same from the simple hard work that went into it.

So, yeah. If the looks turn you away, give it a second chance. If you still can't do it, I get it. But if you can, you're going to get something worth every bit of time you put in.