Where do I even start? How do I begin to describe this game to you? 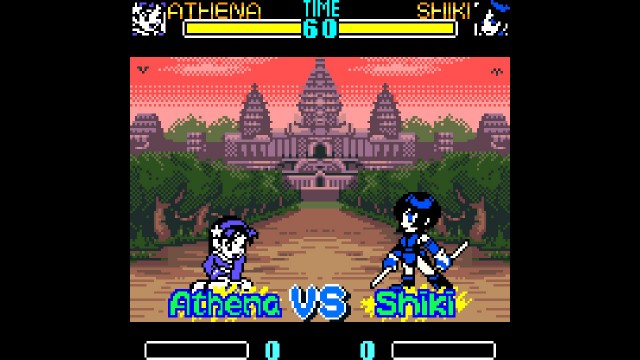 I guess we should do context. Context makes sense, yeah. So, SNK Gals' Fighters is an emulated port of...SNK Gals' Fighters, originally released for the Neo Geo Pocket Color in the year 2000. An obscure little system at the best of times, the Neo Geo Pocket Color tried to bring the ethos and flare of the Neo Geo arcade system (and to a degree, the Sega Dreamcast) into your pocket. Besides having a really cool little clicky stick instead of a dpad, this also meant it had some games you really didn't see on handhelds back then, such as fighting games.

Of course, on hardware pretty similar in power to a Gameboy Color, with a 2 inch screen, they had to make compromises. This is why you barely saw fighting games on old handhelds; the compromises made it impossible to make them both look anything like the console or arcade original, and be any good.

...So SNK just skipped the "look anything like the original" part. 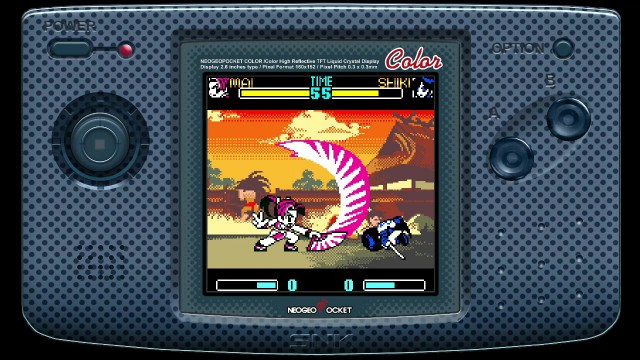 This led to Gal Fighters having this chibified aesthetic, with super bright colors and characters being black outline, white interior, and one highlight color. The results actually look really good. It's an aesthetic that holds up, and has character and flare that a lot of the competition of the era just couldn't match.

These graphical compromises, also mean the gameplay actually holds on strong. It's fast, frenetic, and while it's a pure 1v1 instead of the tag-team action of the King of Fighters franchise, it holds a ton of the gameplay ideas of that series. Short hops, dashes, dodging...They even compressed the 4-button mechanics into 2 buttons by doing taps for light attacks, holds for heavy.

And the results are really good! Traditional 2D fighters are kind of a tricky beast to review at times, since they're one of those "effectively implement a shared idea" things where describing the gameplay loop is either really samey or really in the weeds...But this is just a damn good 2D fighter! It's got classic special moves, supers, multiple character palettes, a basic story mode, unlockables, a whole item system to shake up fights...

Oh and of course it has 2 player vs, like all fighting games!

This is a port. Like, an emulated port, not a recreation.

A port of a handheld game.

From the link cable era. 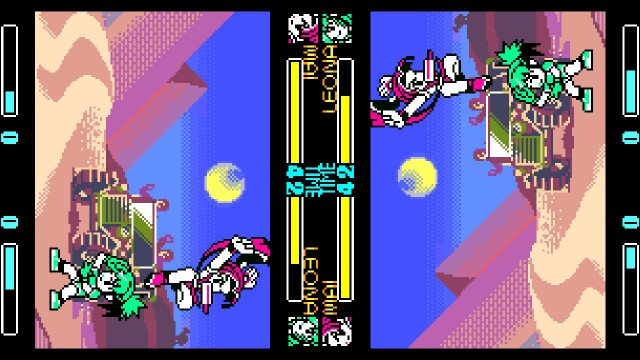 So now we gotta talk the bananas part. Bananas in a good way.

Gal Fighters originally did 2P via link cable. You both had to have a Neo Geo Pocket Color, and a copy of Gal Fighters on you, plus the cable.

Yeah that's not happening. And in the modern day, it's made the game tragically difficult to enjoy properly. So how does the Switch port handle things?

There are two ways.

The first, if you're docked or in tabletop mode with your joycons detached, is really clever. The emulator wrapper whips up a second NGPC for player 2 in the background, and then shows everything on the one big screen for gameplay; a few menu spots have it split out into two screens where the two players would be seeing different things, but since core fighting was synced, it just puts you on the one and It Just Works. It's really nice!

Now here's the reason I opened the review stunned as I did. Because the last thing I needed to test out before I could write this was handheld multiplayer.

And if you play with the joycons on.

This is the crazy shit.

The game splits the two screens out, and puts them sideways, so they're each oriented towards one of the attached joycons. At which point, you then each hold one half of the Switch sideways between the two of you, and play it as a tiny head-to-head cabinet.

And the craziest part is?

The characters were designed for a small, kind of crappy, non-backlit LCD. The split screen is still far more legible than the NGPC's original display, and while a tiny analog stick is no substitute for a clicky stick, it's remarkably functional.

I wouldn't want to do, like, a tournament this way. But it was easy and convenient enough to do that I would seriously consider, say, playing like this during a long transit ride, or for a few quick rounds between classes, or something similar where doing a whole setup and getting out some controllers would be fiddly.

All of which adds up to a really solid game, right? Right! But nothing's perfect. So what are the flaws?

I've got three. One somewhat inherent, one design choice, and one big weird glitch.

The inherent problem. Because of the way they've done this, as just a core emulation with a basic wrapper, Gal Fighters has no communications-based multiplayer of any kind. You can't play online, you can't even link up two copies wirelessly to mimic the link cable play of old. You have to be on the same console. There's ways that this could be fixed...But they'd require some serious investment that I'm just not expecting, especially given that none of the other classic SNK games on the Switch have any online support.

The design choice. That insane head-to-head mode came up automatically, because I had joycons docked. The lack of control over this meant that I didn't even know it existed, but also that I had to take the joycons off when I wanted to just play with my retro controllers in tabletop mode. To say nothing of the weirdness of having to set it up horizontal, then switch to head-to-head grip once we were in 2P. A simple menu choice to turn it on or off would have smoothed over all of this, even if it meant I wouldn't have gotten the stunned joy of seeing this madness literally unfold before me.

And lastly, the big weird glitch. So, let me pull the curtain back a bit. I play my games on a gaming monitor with speakers hooked up to it, all three consoles are wired to this thing. And I have never, ever had any problems. Everything works great; better than great, even, since the monitor doesn't cause any overscan issues that can trouble some games that never accounted for the practice.

No problems, that is, until I played this. For some reason, this one game, this singular game, is muted on my monitor. Nothing else does this. The wrapper menu still makes noise. The Switch OS still makes noise. I can click the capture button and it will start making noise for a second until the layering stops and the game mutes again.

I don't have any idea why it's doing this. I don't have any idea how it's doing this. As soon as I went and hooked my Switch up to my old TV, the problem wasn't there. As soon as I played it tabletop, no problem. Even hooked up to the monitor, if I plug into the Switch's headphone jack for sound, I get sound fine! This very, single, specific interaction of trying to pump sound via HDMI through this monitor's connection somehow trips up this one game. 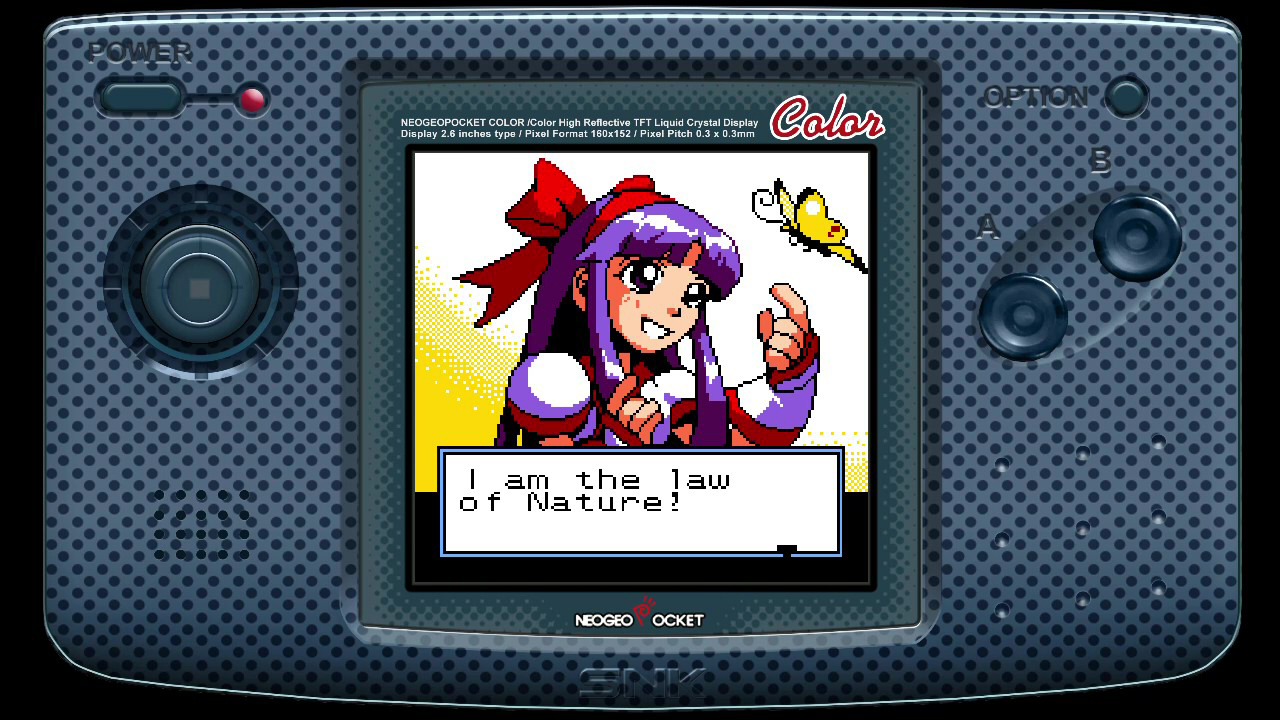 You're almost certainly not going to run into that.

And even if you do, this is one of the single most handheld-compatible games I've ever seen. Hell, I'd play it in tabletop mode on a Switch Lite and be okay.

And the thing is...Even with those flaws? This is a rare jewel in the fighting game scene. A game that could not be properly enjoyed by most for 20 years, where single cartridges cost more than 100 dollars on the used market, to say nothing of all the surrounding hardware.

A handful of compromises are a small price to pay to be able to have this game at all for only, what, eight dollars? That's nothing. Go buy it. Go buy it right now! You won't regret it.