Reluctantly crouched at the starting line, engines pumping and thumping in time.

And it's not for lack of trying, either. With attempt after attempt, I've been able to get a medal once, but never the gold. Mastery continues to elude me, and that's one of the things we're going to talk about. Let's get started. 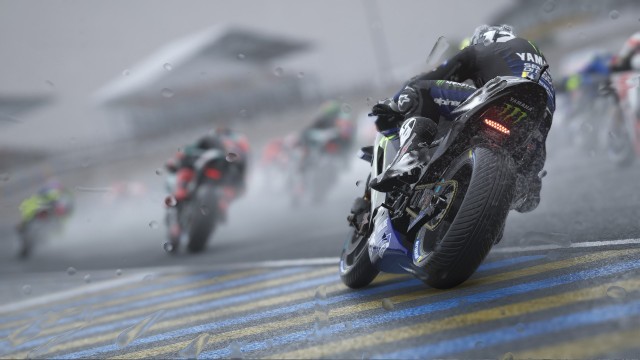 Yeah, philosophy, not gameplay. One of the funky things about reviewing a racing game, especially a real-world racing game that lacks kart-racing gimmicks, is that it makes talking about it as a critic kind of...Weird. There's basically nothing in the concept to talk about here. This is a motorcycle racing game based around the real Moto GP class of the sport, aaaand I've told you the entire concept.

So the genre, like a lot of the sporting and 'direct competition' games, has basically split into two camps. On the one hand, you have all the games that aim for broad accessibility; kart racers are obvious, but so are what I'll call 'action movie' racers that try to make it easy to look like you're an expert at commanding these ferocious vehicles.

And then there's the other side of the equation. The simulators, that aim to be accurate. And you can push accuracy pretty far. The further you go, of course, the more commitment you're asking. That's the entire point of those broad games being easy to learn, after all. But commitment brings room for mastery, command of depth. The further you push that, the more you reward your most dedicated fans.

This is a game where in the more focused modes of play, not only do you only have so much gas in the tank, but it's part of your strategy: Every drop of needed gas you can shave off by racing more efficiently means you can run that efficient route with a bit less weight and a bit more speed. Mastering a track and its conditions well enough in the windup to the actual race that you can leave a bit of gas behind when you roll up to the starting line might just be the difference between victory and defeat. That's...bananas, when I'm used to games in which my strategy is more likely to involve actual bananas. 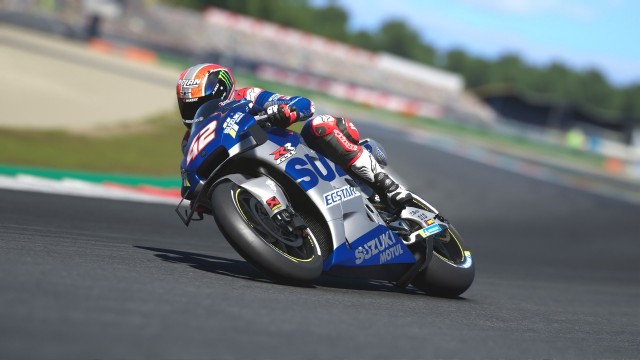 Which brings us to asking how the game executes on that philosophy of mastery and depth. In a broad answer, very well. I'm no expert on motorcycles, quite the opposite, but I can see a lot of places where the game takes special care to be detailed. Even something as straightforward as the physics engine, where they've specifically modeled things like the traction on both the tires and terrain such that different setups can produce wildly different results, shows the focus on getting this sort of detailed depth.

Perhaps the largest place to see it, is the game's centerpiece of the Career Mode. It's a classic setup for one of these; you take your custom rider, sign them to a team, build up their crew, and gradually put together a bike and a plan to rise through the ranks. One part actual riding (and all the details that come with that), one part team management sim, it manages to capture a lot of directions with a lot of detail all at once. For something inherently without a narrative, the Career Mode can really tell a story.

And speaking of the details of riding, there's a lot to cover there. Even something as relatively simple as a Quick Grand Prix, the game's closest equivalent to "hey just let me go do races right now", is a process.You have multiple sessions out on the track where you're trying to make time, and to come to grips with not only the layout, but the conditions of the weekend. And in each of these, you'll be tweaking out your bike, spending session time to ensure it's equipped for the track; one full of tight turns in quick succession needs a totally different set of arrangements from wide curves. 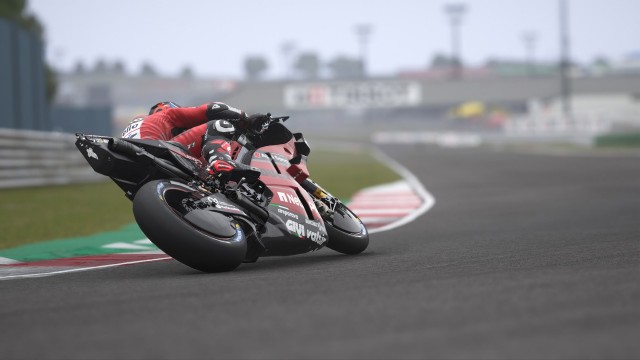 These sort of tweaks do come with a guided mode, where you can tell the game the problems you're having and let your virtual pit crew decide how best to fix them...Or you can just get your hands dirty and do it yourself, picking each tweak manually. Guidance is there in the racing, as well, if you want it; you can turn on an assist mode that will do things like pump your brakes as you come into a turn, and make it harder for you to just slam into a wall or spill off the side of your bike.

Harder, but far from impossible. Like I said, I've had to use that rewind feature a lot.

Graphically, the game is...Focused. The bikes are lovingly detailed, their riders realistically rendered, the road has dynamically generated tire tracks that stay for the entirety of the race...And then you get into the grass and grass just clearly was not interesting to the developers, for instance. But honestly, it's doing what it wants to be doing, and that's all that it needs to.

So where does the game stumble? Mostly, in teaching you things. There's no real tutorial at all, and I had to find the controls from looking them up in the options menu. Even something as basic as what the elements of my HUD meant was something I had to find out through a mix of looking up guides to the previous games in the series, and straight-up trial and error.

Naturally, it is possible I just missed something obvious, or that this was some limit of my playing via a review code; If you told me that purchased copies have a manual as thick as an actual motorcycle's, I'd certainly believe you.

And it's a shame, because once you do get through the details, there's clearly a lot to like here. It just needs...Not even a better onramping process, but one at all. 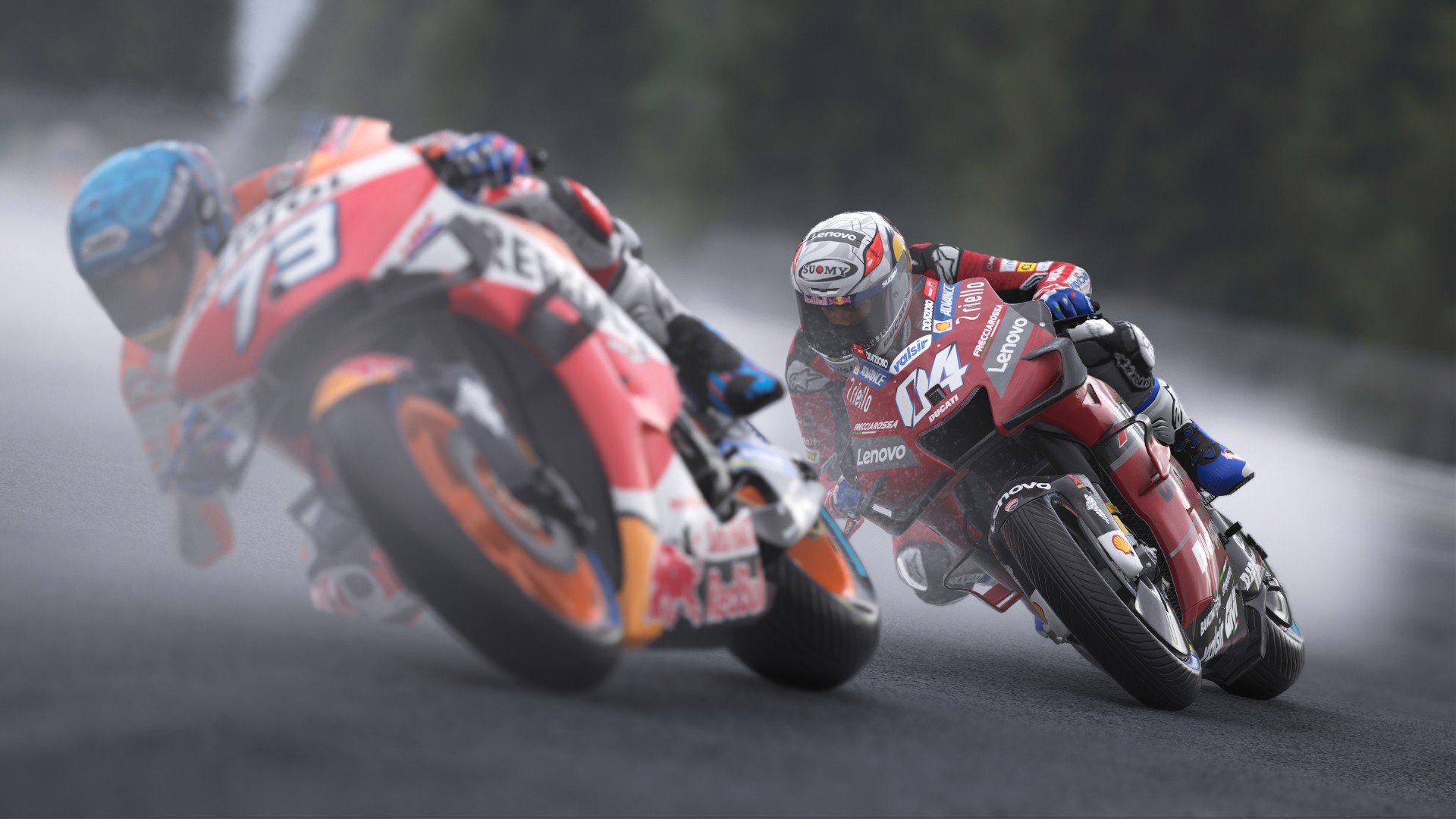 Where's that leave us?

I won't lie, I had some struggle with this one, mostly from the difficulty in wrapping my head around it. As someone who's been into fighting games for most of my life and who's at least dabbled in almost every genre, I sometimes forget how difficult it is to come to a game totally unaware of how its systems are trying to work.

But on the other hand, I also know what passion looks like. I know what it means that this game has dozens of historic riders, their motorcycles lovingly recreated. That the game so thoroughly celebrates the history of the real MotoGP. This is a game by, and for, people who absolutely love this sport.

To say a game is 'for enthusiasts' sometimes gets a bad rap. I remember when that was the phrase put on a lot of 7/10 reviews, back in the days when everyone used number scales. The implication was that the enthusiast would overlook flaws, that if you were just that into platformers or whathaveyou, you'd even play a bad one just because it was there.

But it can also mean something else. That a game is aiming to reward passion and dedication. That it wants you to stick around not out of monetization, but to dive into its depths. That it wants to be detailed, and thorough, and match your love of the material with its own.

MotoGP 20 is for enthusiasts, because it wants you to be as enthusiastic about every tiny detail of the sport of motorcycle racing as it is.

So even though that's not my world, I'm proud to give it a recommendation for anyone ready to try and step into that world themselves.