Strap on your administrative hat and lets get to work! Two Point Hospital will have you laughing and curing at the same time!

By ChickenSupreme | Version reviewed: Xbox One

Well hello there! Today we're going to try something different. As I've been reading a lot of 'Choose Your Own Adventure' books, I shall empower you, the reader, and let you take whichever path happens to be the right choice onward. If you've never heard of the wonderful resource management phenomena that is Two Point Hospital, then read on to the first paragraph. If you've already worked over the game on PC, tearing your way though and now wish to exercise the classic 'Resident Evil 4' complex and buy it on all the consoles, please skip to paragraph four.

A hilarious, and worthy successor to Theme Hospital, Two Point Hospital fancies itself to be a resource management type with a penchant for wacky. As overlord of your various hospitals, you'll be entrusted to look after finances, happiness for both your staff and patients, whilst fighting fire after fire (literally and figuratively) as emergencies and machinery blow up. It's a fantastic time for all--well balanced, colorful, hilarious and addicting as they come.

Taking Bullfrog's amazingly entertaining idea one step further, Two Point Hospital is filled to the brim with content. Loads of illnesses, plenty to flex your interior design muscles with and micromanaging that would make a twitchy accountant proud. Even after I reviewed this game for the first time, I've continued to pour hour after hour into it--seemingly never finding the tail end of where the fun stops. 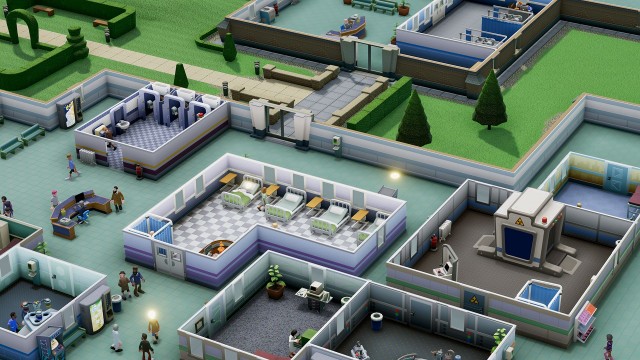 On to the console side of things! As Two Point Hospital is a top down, 3D isometric-ish view, seeing how this would translate from PC to console made me very, very nervous. Saying that I fell in love with the PC version is an understatement--it made my mental game of the year list effortlessly...seeing how this port would pan out felt personal--would they ruin it by making it awkward and overly-complicated akin to a Sims game for PS2?

The answer is absolutely not. The controls are smooth, easy to figure out and come naturally within minutes. I was BLOWN away by this. I thought there was going to be at least one hang up with it, and honestly I could not find any. It is JUST as much fun controlling on a console as a PC, without there any feeling of being limited. Thrilled is an understatement here.

There are a few things missing from the console versions, but not without specific notes of them being patched in later. Most notably--the infamous sandbox mode will take me over the moon when it arrives. On the small downside, there are a few visual/performance bugs, but it's nothing game breaking and you just know the good people at Two Point Studios are on it squashing left and right.

If you like management, or have enjoyed Theme Hospital in the past, you just can't pass this one up. It's stunningly brilliant on PC, and even more so on consoles. Bravo to the hardworking developers to bring us this silly little masterpiece...and continuing to really invest into the community. You all are the real MVPs here! Two Point Hospital on console (specifically Xbox One) is something you shouldn't pass up--and comes sealed, totally in gold with a MASSIVE recommendation from this gal.