I'm not entirely sure how I feel about this one.

So the story idea of the game works like this. You're Felix, a newly hired reaper for the Ministry of Death. Your job is to go to a point in history where someone is supposed to die an untimely death, and make sure all the little details line up right in a most timely fashion. On top of this core premise is Felix's personal motivation, to get closer to Betty, a woman who works for the Ministry of Life that Felix has utterly fallen for. 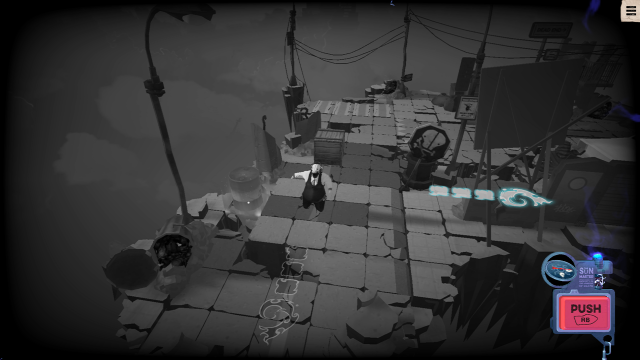 Nnnot that much. The actual gameplay of Felix the Reaper doesn't really do much with the character's reason for doing his job, and instead focuses on the job itself. Every level of the game basically works on a few core premises and rules. By and large, you're trying to get some kind of object from over here, to over there, like getting a megaphone over to a starstruck fan so she can call out to the celebrity across the way.

The wrinkle that introduces all the actual puzzle gameplay, is that Felix by his nature cannot enter the light of the sun. Instead, he has to move in the shadows, and thus manipulate those shadows, placing objects to block light and so on. You can also tilt the sun into one of two directions, perpendicular to eachother, thus letting you travel along the vertical or the horizontal axes of the field.

This creates a surprisingly intuitive little loop of actions, as you manipulate the sun and large objects to thread a path from A to B. The game also introduces further mechanics as you progress through the chapters, such as stacking in chapter 2, which lets items cast a much longer shadow.

It's a solid set of mechanics, honestly, and the game explores a lot of interesting ideas with them...But I have to be honest, it doesn't super feel like it's actually, you know, super connected to the idea of being a reaper. Even the final payoff of these elaborate series of apparent coincidences, to form the punchline of a grim joke, isn't very...reaper-y. 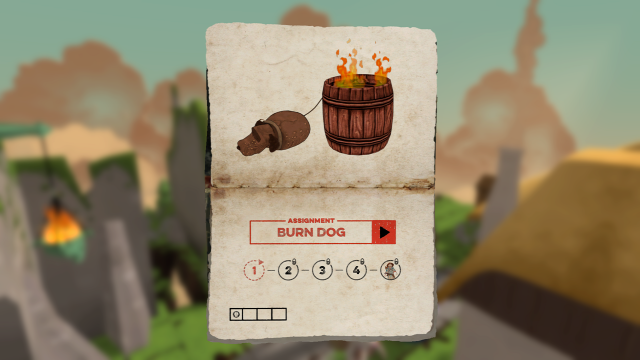 There's two things going on with the aesthetic stuff I want to talk about, and I'm going to break from the smooth flow of the review a bit to talk about something that doesn't have any other place to go.

So, a strongly presented idea with Felix is his love of music. He slaps on a pair of headphones at the start of every level, his boss admonishes him for it in the first cutscene of the game, and his every step is done dancing to the beat of the game's BGM. There's even a track list in the pause menu, letting you skip or replay tracks just as Felix might do.

Any it doesn't, really, affect anything at all. Felix's dancing still runs normally along the game's grid-based movement, you don't have to accommodate it in your planning or anything. The chill, almost vaporwave-y tracks he listens to are pretty good, but don't quite fit the meditative feel of play or the gallows humor of the fiction. His boss thinking little of his dancing and music and such is more of an informed trait than an element of the story, as it's never really shown to hamper his abilities in any way.

And that brings me to where I kind of left off in the last section, talking about the ultimate untimely deaths of the victims of each chapter. There's this, kind of weird dissonance to them. The game's graphical style, as you can see, is very blobby and chubby and...Cartoony implies too much appeal, but definitely a very unrealistic style. And the deaths are often these incredibly absurd things that, were it not for you having intentionally set them up that way, would seem downright implausible.

But then they're not entirely shown comedically, either. Chapter 2's victim dies in the street, and the camera lingers on her body twitching and blood spurting as the rest of her tries to keep functioning despite the massive trauma.

It feels like it either needs to be more exaggerated, to feel so absurdly brutal that it's funny (see any of the various hyperviolent animated series aimed at college students over the years), or downplayed so as to have the deaths feel more like a joke that doesn't worry so much about the reality, like an old Warner Brothers cartoon.

Instead, it sits in this somewhat awkward middle ground between the two funny extremes, feeling kind of...Off. 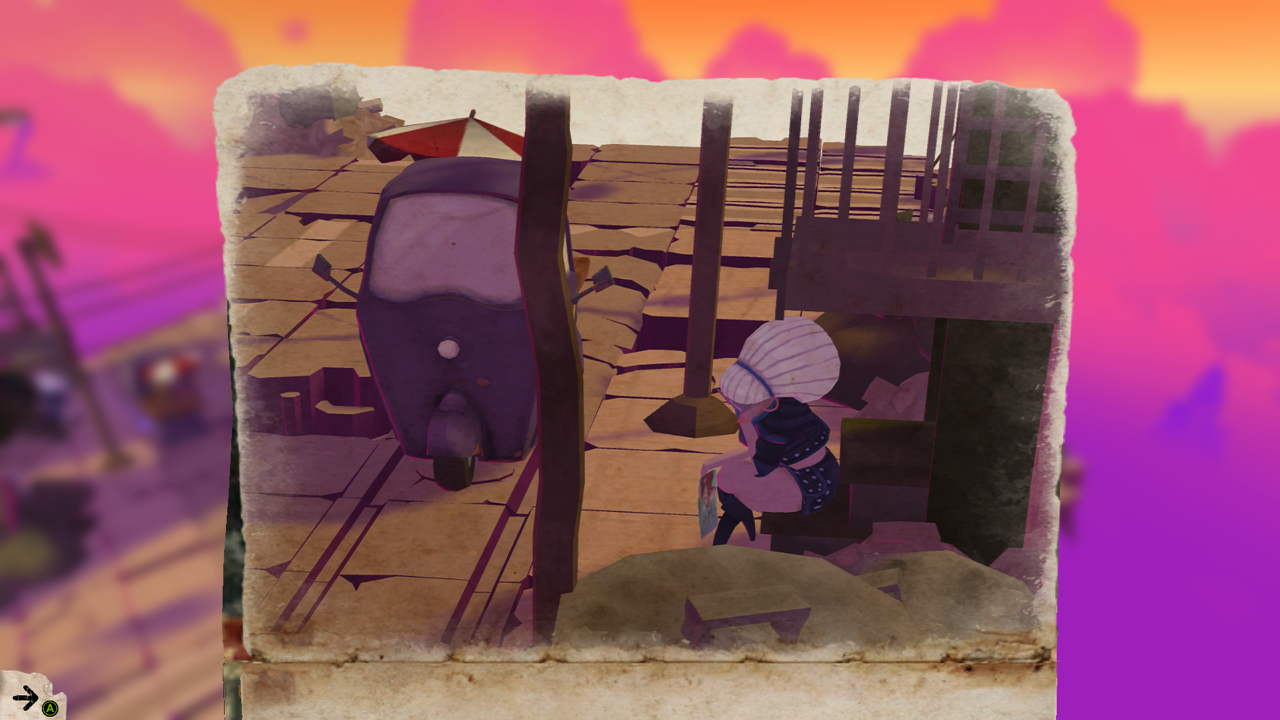 Felix the Reaper doesn't actually have a lot of flaws, per se. There's not a ton that's wrong, I didn't run into many bugs, and the only thing that I can knock the game for is a deeply awkward rating system that, combined with the gameplay, mostly means good ratings come down to memorizing the Correct Solution and running through it as quick and precise as possible.

Well, that and the controls being kind of fussy on Xbox. It feels like it was really made for PC, given that you're sliding a cursor around the screen instead of ticking along the grid. But this is far from the only game I've played with that sort of thing, and I'm not about to ask to totally rework the game's inner frame just to get a slightly smoother control scheme.

No, the real problem with the game is how it feels...Undecided. Like, there's this very smooth core of shadow manipulation puzzle gameplay...And then we tack on this reaper idea to justify why you're doing it, but it only kind of halfway commits to the idea. There's the entire romance plot, but it ends up under-utilized. There's the music angle, but it mostly just ends up informing some unique animations and the soundtrack.

This game feels like, at some point early in development, there was a choice to be made on which direction to lean. What things to let go, what things to focus more on to develop outwards from that initial core gameplay loop. But instead of focusing on one or two things and letting the others drop off, the game ends up with partial implementations of all of them, of which none actually manage to thread a complete loop of gameplay, story, theme and presentation. 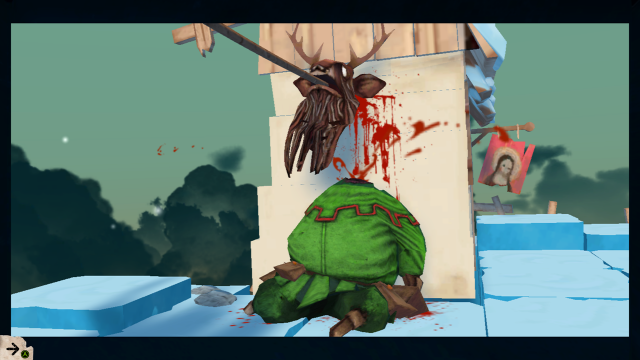 That doesn't make it a bad game, of course. It's still a lot of fun to play, and it still has a lot of really neat ideas.

It just...Feels like with a little more focus on some of those neat ideas, it could have pushed them from neat to fantastic. And it's a shame that they didn't.

So here's the deal. If you were gonna pay money for this, I'd give it a very soft recommendation. It's a game for puzzle fans, where the absolute core gameplay grabs you, and consider all the trappings to be but gravy.

But of course, that's only half the metric. Because right now on Xbox, Felix the Reaper is on Game Pass. And that, that is a very different consideration. It's a much smaller commitment. And thus, if you've got Game Pass, I think you should absolutely try the game. It's not perfect, but there's enough interesting pieces here to be well worth some time.