Fallout mixed with Bio Shock, this game brings all things to the table that a gamer like me who loves, and that is customization. Step into a world where relentless destruction runs amuck. Create, build and craft to take down the terror of this once beaut

By StanEwing | Version reviewed: Xbox One

Before I start to write this review, I just want to state that I have been properly disappointed in a lot of recent video games the past few years. Rarely, a game will fully catch my attention and have me thinking wow, what a great game, very unique. Millions of dollars are spent on creating, developing and publishing games that the companies themselves hype up for the consumers, but when bought and played, a very bad experience follows more often than not getting our hopes up just to be shot down. This is very sad indeed. We spend our hard-earned cash on these outlets that we call video games so that we may escape reality for a little while. I can honestly say that I have been enjoying indie dev games more than I have AAA games. There is nothing more than Devs seem to want to do to captivate a crowd. It seems that it is all about making money, especially with loot boxes and microtransactions that could be easily won or accomplished by simply completing a mission. This game is an extraordinary exception to the contrary. I love a lot of aspects of this game, and there are a couple of minor details that I do not necessarily like. I will get into those details in this next segment. Let us jump into the negatives first so we can get them out of the way and save the best for last. 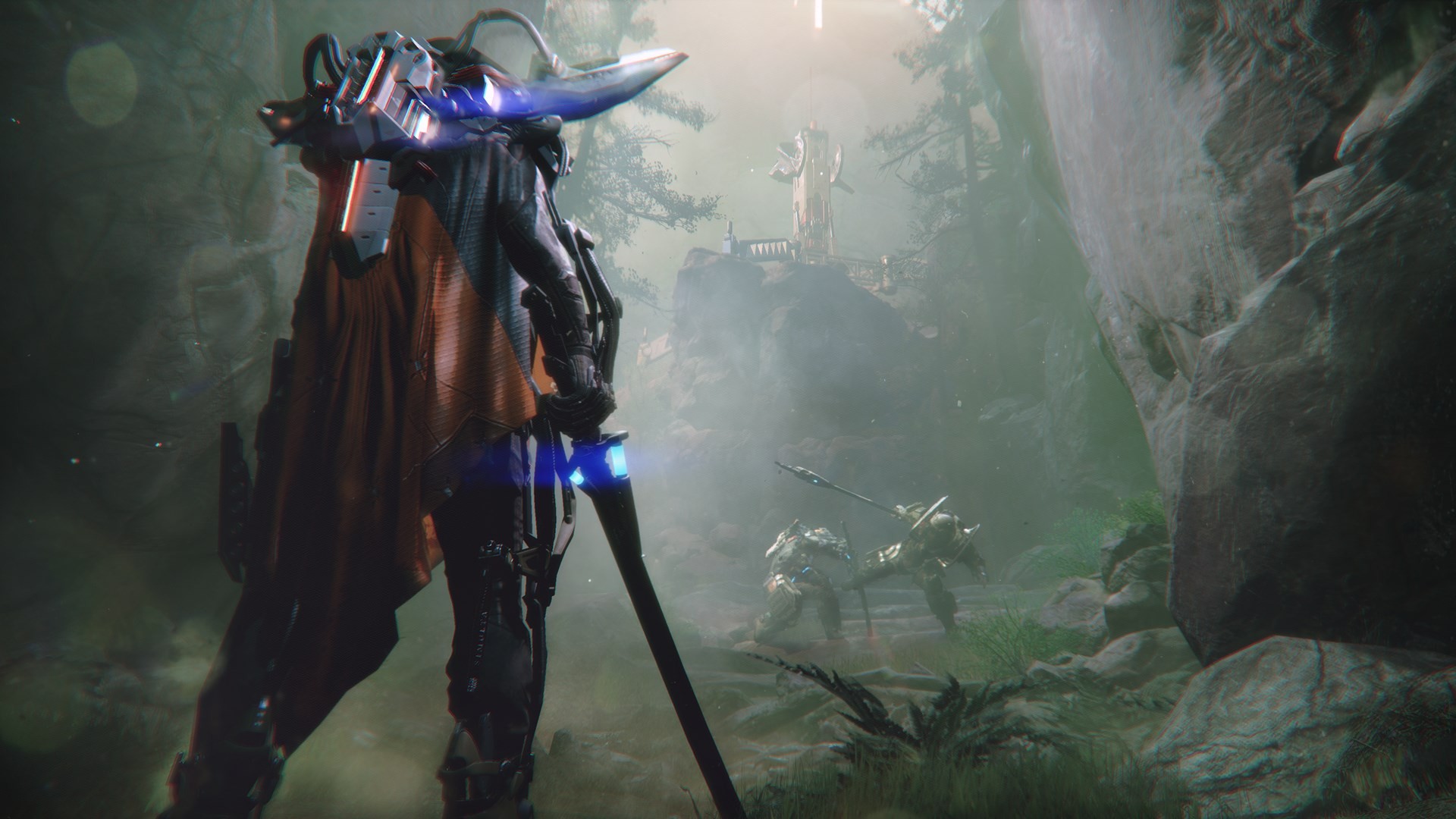 I have never played the first Surge, so I cannot speak on the systematics and all, but what I can do is rate my experience off 2.

You awake in a weird lab dressed in gowns and this is where you make your character. Face, hair color etc. You were the only survivor on a plane crash, after that, not much is revealed. The hospital is deserted except for the insane enemies. You'll have to fight your way through these guys. It took me more than a couple times to even get past the first part. No weapons in hand and no armor, you will rely on your fist. RB is a light swing and RT, heavy swing. You can put together combos later with different weapons. The part I really didn't like about this game is that if you died before you made it to a Medbay, you'd have to start from your last checkpoint, which could be a ways back or possible hard for you because you do not have the proper equipment. Once you do and you finally make it to Medbay, then you can start upgrading your LVL and Module Points. Module Points go towards, health, stamina and battery efficiency. Battery efficiency is used for your implants and the implants will give you extra bonuses. If you die before you make it to MB, then you will lose all of your Tech Scrap. This was probably the most annoying thing for me while playing. When MB is found then you can finally change your gear, weapons and your stats. Keep in mind that this is not the easiest game to play at first, but if it were, then we'd all have nothing to write and bitch about.

Tech Scrap will allow you to LVL up, upgrade your gear and implants. The way to get these scraps is by killing enemies. They will drop glowing orbs and you can then pick them up. The cool thing is once you take your scraps back to the MB, spend them and leave again, the same enemies will be there waiting for you as if they never died. So, this could be considered "farming". I would do this over and over until you are a high enough LVL to move on to the bigger foes in the specific area you are in. 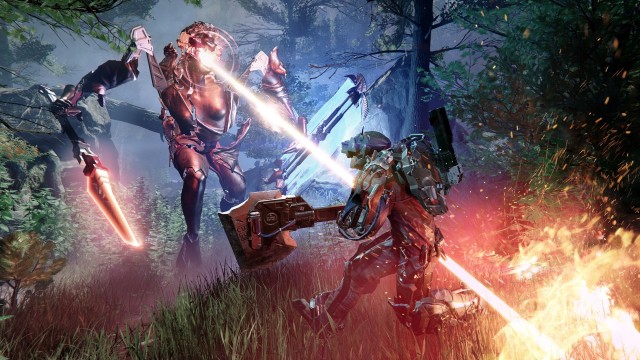 The targeting system is how you gain Tech Scraps, weapons and gear. So far, I have encountered many different weapons ranging from all kinds of shapes, sizes and uses. The first weapon I got was an "Empty INF-Labs Chassis. The damage was 90 and it did the job for the time being. While holding your weapon and targeting your enemies' legs, arms, head/mask etc. you will have the ability to cut that armor or weapon from the evil menace. After you beat them to an inch of their life, the X symbol will appear, and you will then have to hold it to dismember the part targeted. When the X pops up that means you are ready to do a special kill, the game will go into slow motion and you can literally see your character cutting off heads, legs, arms or arms that are carrying weapons that you can obtain. Cool feature and I cannot think of a better and brutal way to procure gear. This is probably my favorite feature in the game.

Now, there is a system that is based off targeting limbs. Let us say that if your enemy is wearing a vest of armor and you want it, lock on with RS and then flick the RS to either the legs, arms, head or weapons. After you cut them off, you can then pick up the pieces and use them for your own personal gain. If I needed the last set of armor to complete the set, I'd target then cut it off and put it on. You can put these pieces of armor on without going to the MB, but I saved my scraps so that I could actually upgrade the armor. Like The, Division, each set of armor has a unique bonus if you have all of the same named gear on and that is what I was looking to find. There are different sets of gear in different sections. So, either cut and slash and get past the level, or keep going back to MB, go back to the enemies and find all the sets. Each set has their weaknesses and their strengths. Some could have better defense while the being weak to acid or electricity and bullets. So, choose wisely. You can wear partial sets of two if you'd like so you can mix up your style and abilities. 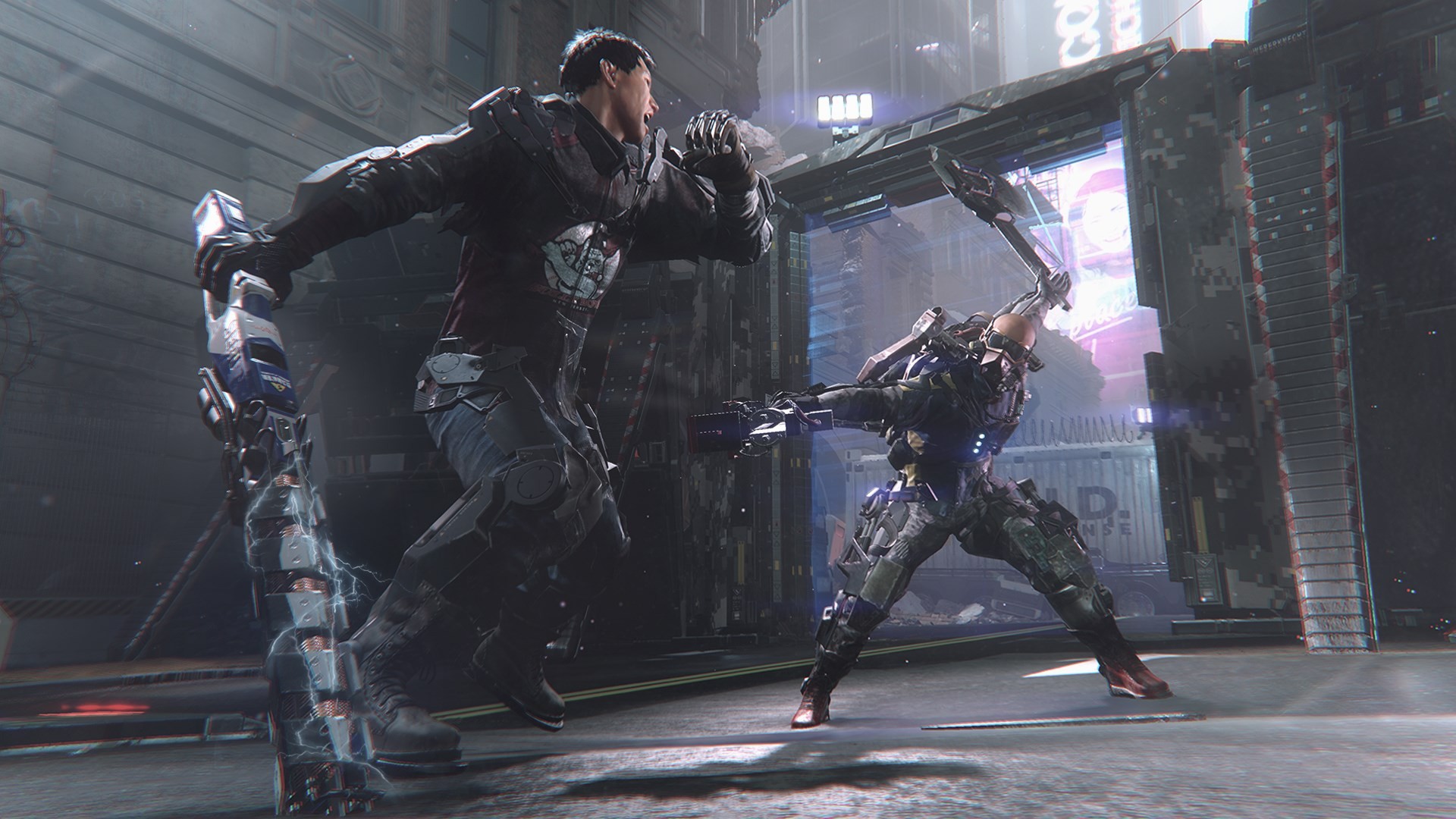 Leveling up is very important. It will determine how many pieces of gear you can wear and at what level you can equip them. If your Power Consumption is too low for a piece of gear that you want to equip, then simply go back and kill the bad guys until you get enough points to level up and equip it. When leveling up the gear that you pick up, you need Tech Scraps and the menu will tell you exactly how many scraps to upgrade. By upgrading, you get higher defense and abilities, and the weapons too, we will get to the weapons system soon enough. You can literally upgrade any piece you want, so try to put together sets. This will help you tremendously when facing enemies. They are hard and they will come at you with aggression. Weapons

You will encounter all kinds of weapons and depending on how strong the enemy, the stronger weapon you will get when they are defeated. You have one handed weapon, which are heavy and to swing the deadly instrument of death will take a little time but does massive damage. Two handed blades, with saws and drills connected to both hands, to sharp blades for duel wielding. And these duel wielding weapons are very fast, and you can lay in some good combos. Combos go as such, LB, RB, RB or RB, LB and LB. All have very cool and variant of swings and blows. Staffs that have electricity that come out of the end, almost endless weapons, so target well and get your equipment. 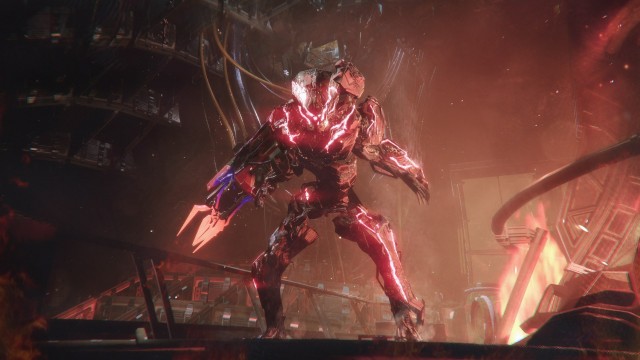 Implants will be upgrades that you can stick into slots. The higher the LVL you are the more slots you unlock and the more implants you can use at once. These implants are also picked up from enemies. When targeting limbs, they will glow orange if the bad dude has gear on him, if not the color will be blue. By hitting the demented city dweller where the blue shows up, you can kill him faster because he has no armor that you can cut off, so if you're looking for an easy kill, then go for the blue, if you want the armor, target the orange on the body. Now, implants like I mentioned earlier are powerups. Some may give you extra health regeneration, another will show you the health bars of the enemies, and if you were to take that off, you will not see how close you foe is to dying, so I keep it on unless something better comes along like, "Rig Capacitor", this will allow your battery consumption to never go under one bar. Implants are very crucial and look everywhere for them. They, they could be in boxes you could smash, or more likely off of a high LVL boss.

The Battery will determine on how many times you can use your special abilities. One being health. There is a health module that if you press B then you can regen a bar of health, but without no battery bar full, you are out of luck. How to fill up your Battery bar is by beating and killing enemies. The more you kill the more battery slots you'll earn. Here is the shitty part, you Battery pack will not just stay there, even if you have a full bar, it will deplete over time. Now, I think that is a bunch of crap, but I guess you can say it gives the game a little edge. Still though, not cool. If you keep the Implant for keeping one bar of battery no matter what, then you will be able to at least have that as back up. When you are dying, the battery is important, because without battery power, you cannot heal. Head that tip.

You have multiple Drone Modules, the R-1 'Diode' Laspistol, is my favorite. The drones rest on your back until you press "Y" then the shoot up and with this particular drone you can target enemies as well, same concept with cutting off limbs, except you shoot off the limb. Pretty cool. There are different drones and they all do different things. 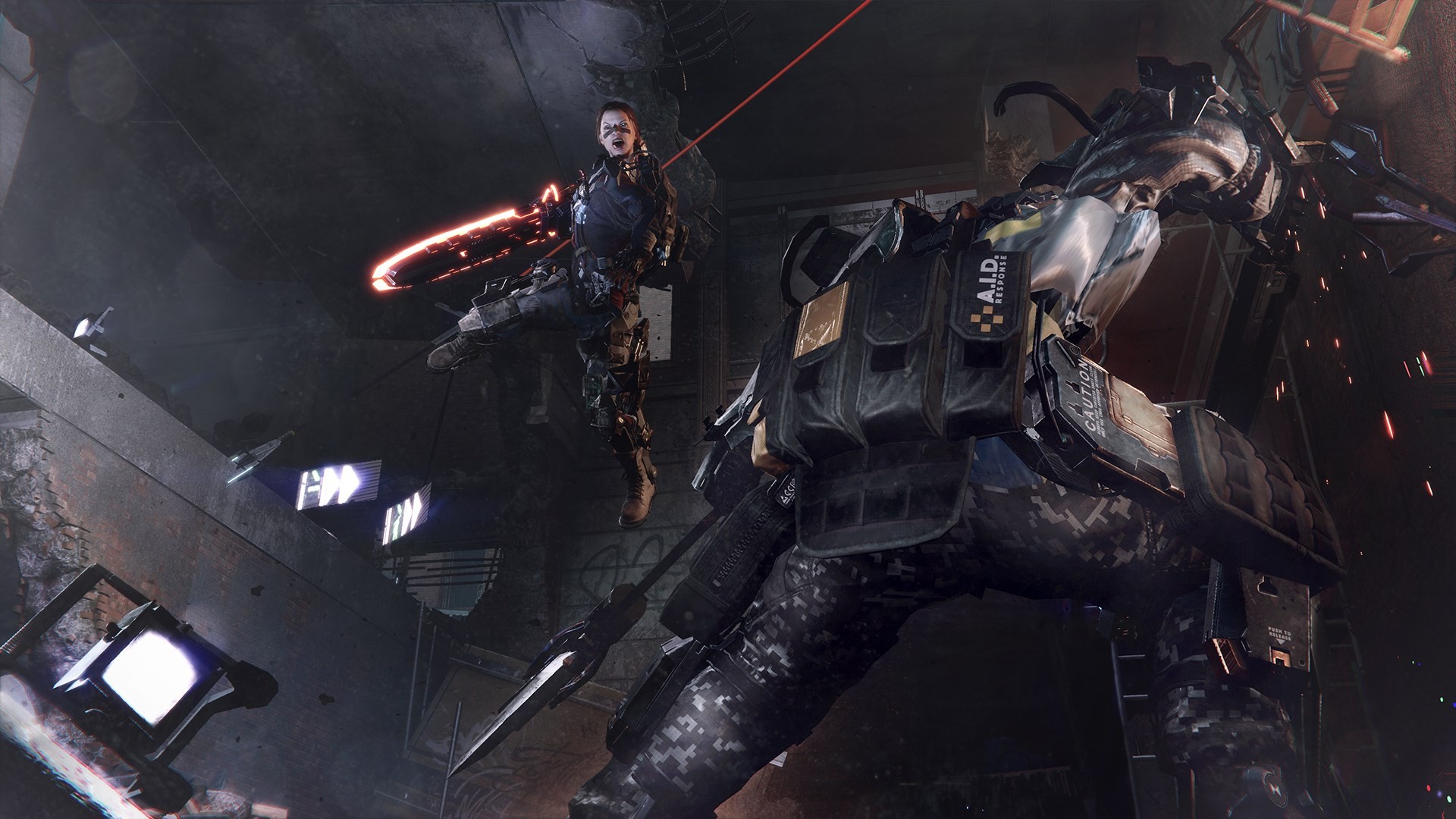