It's some kind of war, possibly advanced!

Go buy Wargroove. You might ask why. It's fantasy Advance Wars, and one of the commanders is a dog. Goodbye, eshop is that way, great to see you, say hi to the kids for me. 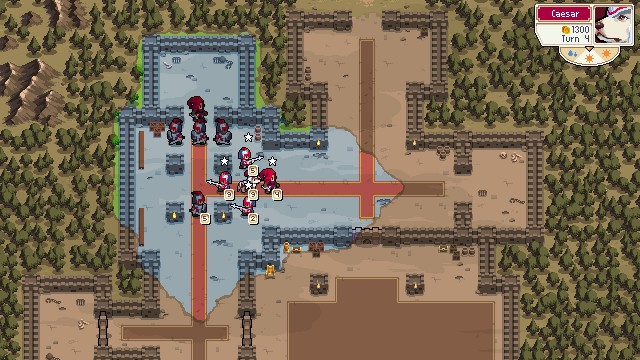 Okay. If you're still here, the sentence "Fantasy Advance Wars" means nothing to you. Let's talk about what that means, so you can then also get going.

So, Wargroove. It's a fantasy themed strategy RPG, built around commanding armies and claiming territory in a style more like RTSes than, say, Final Fantasy Tactics. It's a grid-based game with unit manufacturing, income, and objectives.

Mechanically, how it works is pretty simple; You've got basically three kinds of buildings. Your stronghold, which if destroyed you lose the game; Unit-producing buildings; And villages, which produce money. At the start of a given match, you have a tiny little set of basics, just enough to start getting your first buildings locked down. Unlike the RTS comparison, here the buildings are all fixed, and you take a unit to them and capture them for your own use.

The units themselves start getting really interesting, really quickly. They're largely a fantasy equivalent of units from Advance Wars: Riflemen become swordfighters, bazooka soldiers become pikefolk, that sort of thing. Right out the gate, your basic units all have this kind of rock paper scissors thing going on, where some units can simply wreck certain others, even punching above their weight class.

But there's also a really nifty thing that Wargroove put in for itself. Critical hits. Every single unit has a simple condition that gives it a big blast of bonus damage. Pikefolk get crits if they're standing next to another of their fellows, for instance, while archers get crits if they stay locked down and don't move that turn. 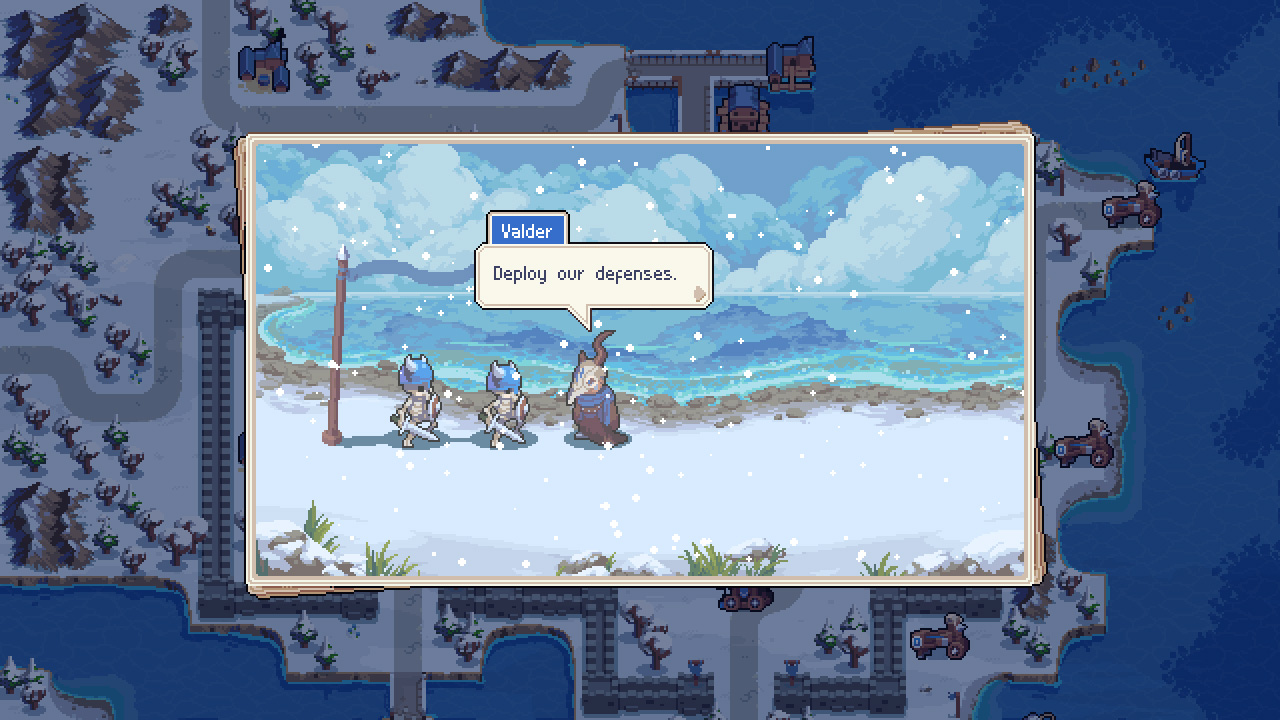 These offer a simple little extra wrinkle to your planning, just enough to produce interesting questions. Setting up a pike wall becomes total good practice, but that also means probably committing at least one of your troops to just being the support. Getting that archer crit is delicious and might take down an enemy in one shot, but if they've got to stay in an easily assaulted position to do it...?

Good, tasty questions. But on top of those, you've also got one more type of unit to throw another wrinkle into planning. Your commander themselves. Unlike most of the games that are being pulled from here, in Wargroove your commander is a super-unit who always stands upon the field. And if they're defeated, you lose immediately.

It's a pretty classic conundrum. Do you use your super unit to do serious damage, or do you keep them safe? Oh, and every commander has a power charged up by doing damage, which can have serious effects on the battle...if they’re close enough to do it.

Layers upon layers. And while a lot of them are familiar, not only are they well done here...But, honestly, it's been so long since we've had the original Advance Wars games to scratch this itch. That we're sticking to this formula here is exactly what I wanted from the game.

While the story, of newly-crowned Queen Mercia trying to protect her people from the deadly necromantic forces of the Felheim Kingdom, is a bit generic, there's tons of great little character moments. You've got folks like Ragna, made of the greatest parts of the greatest warriors...And the result is a bundle of teenage angst and fury in a body that's only got five years of unlife to build experience from. She is, for the record, kind of amazing. 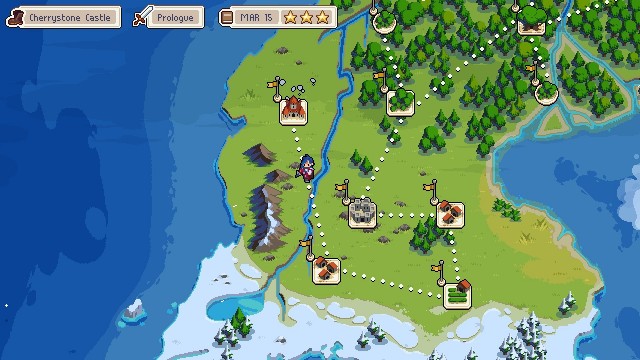 Or did I mention the DOG? I did. Caesar is, and I am quoting his official bio here, "A magnificent and majestic canine" who leads armies with "wordless dignity".

The army listens to a dog.

I know there's a lot of big, serious games coming out this month, with lots of rich lore and important history codexes and stuff.

None of them have an army led by a fucking dog, and they are lesser games for this cowardice.

(There is also a dog UNIT, so you can have the big dog giving orders to other, smaller dogs, and why are we still here)

Okay. Really good strategy gameplay, fantastic characters, did I mention the gorgeous sprite art? I'm mentioning it now. It's been mentioned. What else is good?

Well how about cross-platform multiplayer? We got that. (Though to my knowledge, PS4 will be excluded when it's out, as per usual)

Oh, and a map maker.

With a cutscene maker.

So you can build a whole mini campaign of your own.

Okay, there's a few obvious ones that are getting patched. It's too easy to end your turn before you planned to, and there's no checkpoint save system so if you fuck up a turn badly enough you could easily have to redo the entire stage. A few of the commanders are just, straight up, not balanced well. But these are all getting fixed.

Also...Real talk, the game would really benefit from being able to zoom in on the TV as well as in handheld mode. I'm on a 32" TV, guys, some of the text is giving me flashbacks to Dead Rising. I literally had to get the VGA connector and hook my 360 up to an old computer monitor to play that game, and right now I’m finding this one a lot smoother in the hand than on the TV, since everything is (very nicely) scaled up on the Switch’s little screen.

Anyways. Wargroove. Has some problems that are getting patched, has some little kinks to work out still. But it's so god damned good and we haven't had a game like this in so long and GO already go buy the bloody game!